Are you properly compensated for your work? As we discussed previously, between 1947 and 1973 worker’s salaries accounted for half of Gross Domestic Product (GDP). There was a solid if unspoken agreement that labor and capital split the spoils of the free market equally between them.

But what of output per worker? Is it possible that workers are slacking off and don’t deserve the same arrangement they had in the immediate Post WWII era? An analysis of productivity, or output per worker, shows some interesting trends that may point to more unspoken agreements that the various markets for capital and labor expect. These trends follow business cycles, and as such point to some important changes that are necessary as we move ahead into the next cycle in the next few years.

Productivity is a simple thing to define. It’s simply the net output per worker, which is to say GDP divided by the number of workers. Generally, as long as it is going up we can expect the standard of living for workers to constantly rise and economic growth to continue. It’s one of the basic underlying indicators of the long-term health of the economy.

When productivity growth seemed to be slipping back in May, a sense of panic ran through the financial press. Without rising productivity the “recovery” that we have been longing for will reasonably stall. The theory is that higher productivity makes each worker more valuable – pointing to a need for more workers to generate more profit for the company they work for.

Higher productivity means something different for workers, however. Theoretically, higher output per worker means higher salaries because each worker is worth more. But increasing use of automation has turned that upside down. Far too often, today’s productivity gains are tomorrow’s unemployment. The information age has replaced millions of clerks who pushed paper all day with online forms.

Here is the last graph from the discussion on worker’s salaries as a share of GDP, with a few additional comments. GDP is in constant 2009 Dollars:

Productivity since 1947 in constant 2009 Dollars. Data from the St Louis Federal Reserve.

The years when new business cycles started are marked with vertical lines. There are definitely trends that correspond to these cycles, which are best described in chart form:

Longtime readers of Barataria will note that the “Managed Depression” that we are in started around 2000, which can be shown in many ways. The stock market today, despite being close to a record high, has not equaled the height of 2000 in real (inflation adjusted) terms, for example, so the long rise since 2010 has still not brought us back to even.

Through the four postwar business cycles, productivity has risen fairly consistently. The previous bear market period saw a significant slowdown, however, which explains the period of stagnation in stocks, wages, and eventually employment. But the most recent bear market has not experienced the same reduction in productivity gains.

Yet there is something very different about the period after 2000. Productivity gains are coming at the expense of workers and not in real gains in the economy.

It’s worth looking at productivity since 2000 a bit more closely to see what has happened:

Productivity since 2000, in constant 2009 Dollars. Data from the St Louis Federal Reserve.

Note that when the official “recessions” of 2001 and 2008 came there was actually a net rise in productivity. By this chart, they look like good years for business even though we know they were terrible for the job loss and stock buying both. We can see what happened by paying attention to those times when productivity gains rose most substantially by comparing them to the chart of total employment in thousands in the same period:

Total employment since 2000. Data from the St Louis Federal Reserve.

The overall productivity growth was clearly maintained by shedding workers, not by actually growing. It’s as if the machinations of hiring and firing were nothing more than an attempt to paint a line on the productivity chart showing that everything was allright no matter how many people had to be fired to make it look good.

Clearly, productivity growth of $1.2k per year is expected in our world. The recent downturn in growth, which is shown in this chart, does seem worrisome. As we discussed before, hiring appears to have gotten a bit ahead of economic growth for the time being.

This is critical because these charts describe exactly what “austerity” means in this kind of downturn. The cycle that we are in, described as a “depression” or an economic “winter”, is caused by a shortage of demand for the goods and services produced. Prices can fall in a deflationary spiral if not propped up by cheap money thrown into the economy – which is exactly what policy makers have been doing through the Bush and Obama administrations.

That’s what we mean by a “Managed Depression”. It actually almost worked.

Yet the missing element that has not turned the economy around remains upward pressure on worker’s salaries. As we discussed before, the average worker’s pay would be about 16% higher if the split between labor and capital remained 50/50 as it was forty years ago. That’s about $700 per month to the average worker.

Given that this cycle is about lowered demand for goods and services, that would be a real boost to the economy.

Instead, we have downward pressure on wages which is accelerated by high long-term unemployment and many workers applying for every job at every wage. The cycle of reduced demand continues and the economy never seems to quite recover. A large wave of hiring at today’s conditions would only kill productivity numbers. 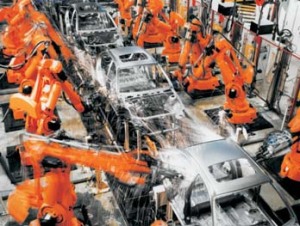 What can we determine from this analysis? That the current business cycle, featuring a lack of demand, is indeed perpetuated by increasing automation and reduced reliance on workers. This fits well with the classic analysis of business cycles as the process of absorbing disruptive technology through a period of first rapid economic gains followed by a bursting bubble as productivity gets ahead of demand.

Where this “Managed Depression” has been handled well in terms of maintaining a veneer of economic stability the mechanisms that have been used only accelerated income inequality by reducing demand for workers and suppressing wages.

It will end when there is a net shortage of workers, which we can still expect when the Baby Boom starts to retire in large numbers after 2017, as we have discussed before. Until that time, policies that encourage employment are essential to increasing demand for workers in order to end the spiraling lack of demand.

Austerity is exactly the wrong approach, as shown in Europe. But government spending to “prime the pump” may not be the best approach, either. The only thing that makes sense is reducing the overhead per employee and putting into practice a radical change – “Tax profits, not labor”.

Only then will workers be on a more even footing with automation in the drive for ever increasing productivity.

There are many links to previous articles, so if you want more information on a topic please follow them.  Thanks!

28 thoughts on “Tax Profits, Not Labor!”