Another day, another person dead from a police bullet. Another night of unrest as anger spills out into the streets. Another heated round of angry statements from all sides shouting past each other. Another opportunity missed to speak words of healing, love, and respect.

We say “Black Lives Matter” because it is not at all obvious that our nation believes this. It seems obvious enough that “All Lives Matter”, but when you focus on those of us who are darker life seems much more disposable, much easier to kick to the curb and forget.

When we say Black Lives Matter we say it not as a direct challenge in opposition to the officers in uniform or to white people. We say it as a challenge to the systems that produce far too much death far too easily, and as with everything bad in our nation that death falls heavily, horrifically on black people. That is why we have to keep saying it until it is true – Black Lives Matter.

The national problem is a simple one – police kill a large number of people all the time. So far this year, there have been 844 people, and it is only September. Some of these were justified, certainly, but the number is unbelievable. No other nation has a tally even remotely as high.  Many large and developed nations go for years without a killing by police.

According to the Washington Post, about a quarter of those killed by police were black – though they are only 13% of the population.

There is no doubt that police also shoot white people, and many of those killings are under circumstances that are hard to explain. An unarmed deaf man, Daniel Harris, was killed last month largely because he didn’t understand the instructions shouted at him. He was white, but that didn’t save him. Did the Trooper have training for this situation? If not, why not?

That takes us to the core of the problem. Police are very quick to shoot, very quick to place a lethal shot, for a lot of reasons. When these events happen we always call for justice, a core value of any free people. But what is “justice” when Philandro Castille and Daniel Harris and Terrence Crutcher and now Kieth Scott are dead? What legal process could possibly bring them back?

The only sense of “justice” we might have is if we make this stop.

Our system does not hold our police to the highest possible standards and, critically, give them what they need to perform at these high standards.

Far too often, in a troubled community, the only contact with the city services comes with sirens and disco lights blaring. That is systemic problem number one. Our police are called on to be the primary caregivers for the souls of our neighborhoods. How many have the training to do this? How many have the support they need? How many have the personality to be a therapist and pastor and community organizer at the same time they are the armed enforcer of the law?

This isn’t a matter of a cop here or there. This is about core problems we are too ashamed and cowardly to deal with openly and honestly. This is the United States, and the issues which we mentally shut down on the quickest always have the color of skin somehow imprinted on them. We can’t go there, we can’t admit that racism still defines far too much of who we are as a people.

That is why we say Black Lives Matter. We have to. We must confront this.

Like so many issues which define America today, this also breaks down by generation. Where only 11% of the population backs the statement “Black Lives Matter”, a solid majority of Millenials do – even among whites. There is hope for us even as the violence flares around us.

Sadly, the violent responses like we have seen in Charlotte are what may truly make a difference. As a punk kid in Miami, I remember the riot in May 1980 when the city burned for three days when the cops who killed Arthur McDuffie walked away free. I remember many adults in my lily-white suburban world saying that they understood. “Maybe now there will be changes around here, maybe this will get some people’s attention.” It was that bad, it was that obvious.

After the riots there were changes. Miami, that crucible of the world coming together, has gotten past the worst of racial hatred. It worked.

Black Lives Matter. We have to say it until it is true. 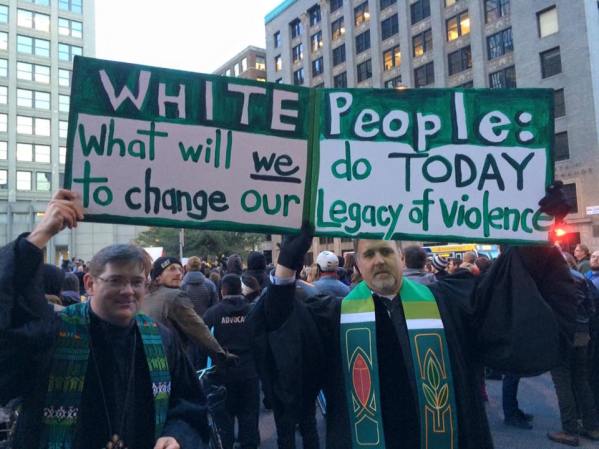 From the recent Black Lives Matter protest in Minneapolis. The two were identified as a Disciples of Christ Pastor and a Presbyterian Minister. The get this.

13 thoughts on “Why We Say “Black Lives Matter””