July means many things.  There’s heat, thunderstorms, fireworks, and kids having a chance to just be kids.  If you’re interested in economics, however, July means that the second half of the year and the third quarter are starting – time for some new stats to start rolling out!  If that doesn’t sound like a good time to you, just wait – you haven’t seen the lack of fun in the stats themselves.

The problem everyone is starting to focus on is job creation.  We simply are not creating jobs at anywhere near the rate necessary to absorb either the unemployment or the young people who are entering our workforce in record numbers.  While “initial claims” for unemployment, or people asking for the bennies for the first time, are down they are still stubbornly at about the level you would expect in a regular recession.  This chart is from the St Louis Federal Reserve: 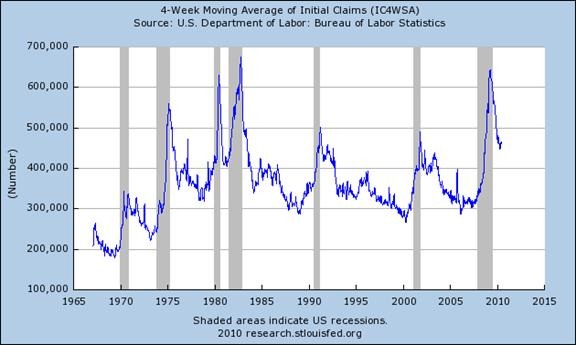 I wanted to present this first because it gives the “falling unemployment claims” that are commonly written up in the press a little bit of perspective.  Overall, the chart looks a lot like 1980 when it comes to claims for jobless benefits.  As the year progresses the simplest thing to watch if you are looking for signs of a recovery is for initial claims to drop below 450k per week, where it has been for all of 2010.

But initial claims aren’t the only place that needs a little extra perspective away from the cheerleading in the nooze.  To understand how this Depression hurts overall household income another chart from the St Louis Fed is pretty handy: 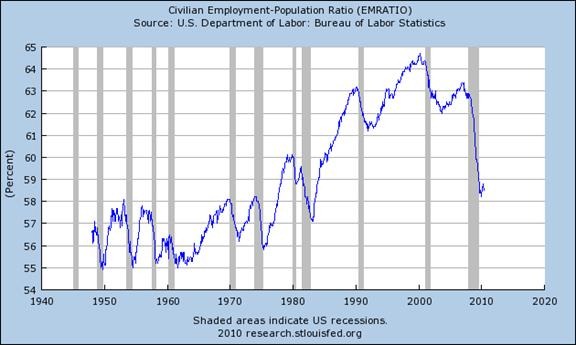 While the St Louis Fed has a lot more interesting stuff for those of us who love stats and charts, I’ll leave it with these two.  Together they have something to make sense of a commonly reported number and some perspective on why job loss has been such a big problem.

A bunch of numbers may not be your idea of summer fun, but these numbers probably aren’t anyone’s idea of fun no matter what.  All we can do is hope for better the next time we check in.