Though we live in a very human-made world, we still have animals around as pets.  Some are kept for their cuteness or friendliness, a few intrigue us because they seem smart.  But how smart are animals compared to humans?  Recent research suggests that some, in particular birds, may be a lot closer to our intelligence than we might like to think.

I have always had a few animals in my life.  These have included dogs, cats, gerbils, hamsters, a mockingbird, a carolina anole, parakeets, and ducks.  Each has had their own intelligence in their own way, but my favorite of all was a Muscovy duck named Elizabeth. 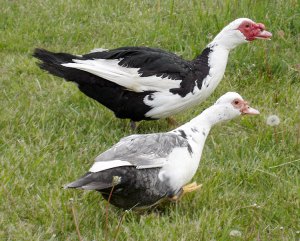 A Muscovy Drake and Hen

For those of you who don’t know the common Muscovy or canal duck of South Florida, here is a drake and a hen.  They are usually regarded as a kind of vermin, making a lot of mess and not being all that bright.  I tended to a flock when I was about 8, feeding them and getting to know them.  Muscovies, from what I could tell, have two separate male and female pecking orders, much like wolves.  The top of the female order would often come and sit in my lap in order to be fed first.  Since she was the queen, I named her Elizabeth.

No other duck would do this.  I think that Elizabeth insisted that she be shown favoritism in part to keep her status as queen, which is to say she was very brave.  That was remarkable enough, but over time we came to regard each other more closely than that.  Even when I didn’t have food she would come over by me and just look, clearly trying to figure something out.  I don’t know what she could understand – but I was sure that she wanted to understand a lot.

Not many people would believe that a common canal duck is all that bright, but studies have shown that some parrots are much more intelligent than anyone ever thought.  The best known of all is Alex.

Alex was purchased from a pet store by Irene Pepperberg in 1977 for the purpose of finding out what he could learn.  Over his 30 year life the li’l “one pound ball of feathers” learned about 150 words, demonstrated an ability to count to at least six, and could sort by color and shape.  In short, he was about as smart as a 2-3 year old human – and because he was an African Grey, he could talk about as well as one, too.

This may not be too remarkable to anyone who has been close to a dog or a cat, which seem about as intelligent to most of us.  But it is very surprising in the academic world where it was always assume that a big brain was needed for intelligence – something a little parrot simply does not have.

Most people would never think a canal duck has that much intelligence, either, and I can’t say for sure.  I do know that my neighbor’s mallards had at least six distinct calls – six “words” needed to keep the flock together.  Ducks, like all birds, are probably a lot more intelligent than anyone has ever given them credit for.

Why should anyone care?  Because, very simply, if something with a tiny little brain might be as intelligent as our own children it has to change our view of how we relate to the world.  If we hadn’t evolved into intelligent some 100k years ago there’s a good chance that eventually a parrot or a duck might well have.  Given that we haven’t evolved too much in that short time there is always the off chance that some other species could catch up to us – or take over after we do something stupid and exterminate ourselves.

It may be little more than academic in the end, but I think it’s good to know just how not-special we are.  Even parrots might be passing some judgment on us that we may not exactly appreciate.