The Thanksgiving table groans under heaps of food, more elbows resting on it than it ever before, and the weight of heavy conversation catching up on the last year.  The holiday scene painted in the minds of every American plays out differently for each family.  Some open with the Baruch, some the Lord’s Prayer, and others with a call away from the Lions game.  The expression is the same but the words and actions are different.

This is not only Thanksgiving, it is what the USofA is all about.  The story of how we came to be such a people cannot be told often enough.  It is a story of deliverance away from terror to a tough land that, in the end, always provides. 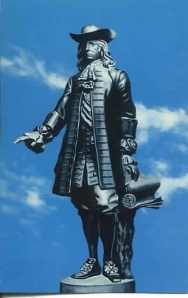 The threads that wind together to create Thanksgiving all start with oppression.  Some Puritans craved freedom to worship in their own way that separation across the Atlantic was necessary.  Those who stayed behind eventually took over their nation and implemented their own terror campaign, scarring a land that had already been divided for a century between Catholic and Protestant.  Out of these bitter ashes came the stark realization that religious freedom, a separation of church and state, was the only way to preserve both.

William Penn poured the debts owed to him into this ideal and became the “Absolute Proprietor” of a land dedicated to this new concept of freedom.  The lands that grew around him were not made of the same material, but eventually attracted the misfits of Europe who had reason to flee.  When they finally banded together to create a new nation based on freedom, separation of church and state was included as one of the basic tenants of the land.  It was decreed that Thanksgiving would be celebrated in November, a bit late for a typical harvest festival, to celebrate the ratification of the Constitution that made the promises real.

Over time the nation grew and picked up more misfits from the rest of the world.  Each Thanksgiving there were more ways to celebrate it in the ways of each family, all Americans in their own way.

Today, the tables groan from the weight of a great bounty under rich language in Somali, Hmong, Cantonese, Farsi, and many other languages the founding fathers of the nation would never recognize.  But it is the same Thanksgiving as sure as it is the same principle that created the nation and brought so many people to this rich continent.  We have all been delivered to a great land defined not by material wealth but by the values – the belief that there is a place for everyone at the table.

May you all be truly thankful for the gifts we have, and in our gratitude may we reach out to those we might not understand, agree with, or even particularly like as we live up to the values that are often bigger than what we can all understand.

This essay contains two links to past Thanksgiving essays that say far more on the topic.  Please click through for some more Thanksgiving stories and have a great holiday.  Thank you.