What will it take to solve the Euro crisis?  It’s an important question because no one professes to have the actual answer for the long term.  Injecting €100B or so into Spanish banks does nothing more than buy time – the real problem is that they cannot service the debt they have now or in the foreseeable future.  Ditto for Greece, which would prefer to grow its way out of the problem but does not have an economy that is capable of doing this.

So what is the solution?  There may not be one in Europe or anywhere else.  In other words, collapse may be inevitable.  It’s worth looking at this worst-case scenario not just to prepare for it somehow, but because it suggests that eventually we’re going to have to push a big, red button labeled RESET. 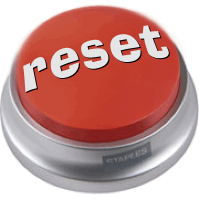 When there are trillions of ($£€¥) owed by nearly every bank and nation to nearly every other bank or nation, at some point it stops making much sense.  Logically, if everyone suddenly started over with no debt on their books they’d lose out on what everyone else owes them but also not have to make payments on their own debt.  That’s the big reset, and it might happen if everything does come crashing down.

It doesn’t turn out well because not all of the debt outstanding comes from or goes to the same place.  There are, ultimately, construction projects and manufacturing operations all over that need to borrow to pay their workers before they start making money off of whatever they are doing.  So there is a net benefit to the economy provided by a banking system.

But if it did go away overnight, would ordinary people notice right away?  What would happen if everything was done with cash in a credit free world?  It would take some tie to get used to it, and during that time everyone would spend much less than they do now.  That would create tremendous unemployment and affect everyone’s life.

So a full-on reset is not desirable.  But what if truly bad debt was written off by nations and banks all around the world at once?   This would be only the stuff that is probably going to be defaulted on one day anyway.  What if, instead of printing money and sending it into the dysfunctional system operating in (US, UK, Europe, Japan) the central banks said, “Give us your tired, your poor, your debt that is trash anyways, and if you cancel it we’ll print money for it once you for give it”?

That, I think, is the only viable solution over the long haul.  Anyone who holds, say, Greek debt that they think will be worthless one day simply turns it over to the European Central Bank which prints the Euros necessary to buy it.  Greece gets out of its debt, the bank has money, and the printing of cash actually goes out into the world for once rather than sit around doing nothing.

Repeat that process around the world as a one-time bonanza, and we’re talking something big.  A lot of cash or debt relief suddenly shows up all over the world.

Now, it may not make sense to buy everything at face value.  But let’s say that the Fed will buy absolutely anything – bad credit card portfolios, mortgages, etc – at something like 50 cents on the dollar.  You want to dump it, you can, but you take half the hit.  How much would they send out into the economy?  My guess is something around what they already have, which is to say over $10k per household, but it would benefit just about everyone.  Yes, debtors would get a free ride – but creditors would also have a chance to dump underperforming assets and get on with the next economy.

Note that this should not be limited to banks.  It should take in everyone.  Make a one week window to apply for this relief and sort it out as fast as you can.

It’s like pushing the reset button.  It’s the only real solution over the long haul, and something like this is probably going to happen eventually.  Why not make it happen now?

17 thoughts on “The Reset Button”