News shown out over the highway in big glowing numbers – 3.289, a number lower than anyone had seen in a while.  That was the price per gallon of gasoline the last time the little purple car was filled up and piloted back down the highway.  A few months earlier it was 3.929 at the same station, about 20% higher or $7.68 over a tankful.  How can that possibly be?

Many things go into the price of gasoline, but the most important is the cost for crude oil.  Something around 60% of the cost at the pump is the raw material that fuels our lives, the rest being more or less fixed costs in refining, transportation, taxes, and profit.  It’s the price of oil that is notoriously volatile, driving the changes at the pump.  And something is about to be done about it, too.

As reported here last May, the market for oil is volatile to the point of being dysfunctional.  As shown by the price of West Texas Intermediate (WTI), a benchmark middle-grade oil, since the economic bottom in 2010 it has flopped up and down tremendously: 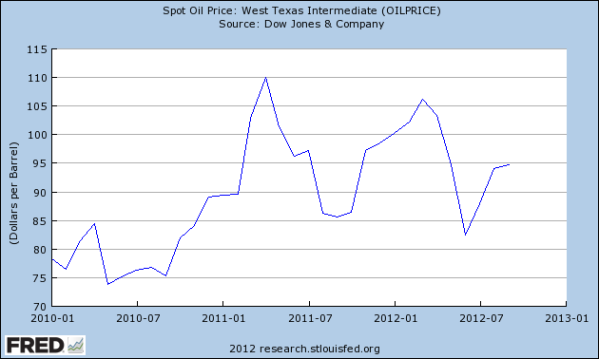 This chart from the St Louis Federal Reserve shows the problem immediately.  Through this weak recovery WTI has averaged $90 per barrel (42 gallons), but has hit as high as $110 and as low as $75.  It gyrates up and down a stunning 20% above and below its average on an annual basis.  How can this be the case?

At the very least, the futures market is not functioning as it should.  Stable prices for key commodities are what a futures market is supposed to be about, more or less moving stocks forward and backward in time.  It does this by being a place where suppliers can sell their production months or even years in the future, raising quick money to bring more capacity online.  That should bring the price down, and the market should find equilibrium.  But oil does not work that way.

This naturally brings about charges that the failure of the futures market to bring stability comes from its role as a haven for speculation and manipulation.  Joseph P. Kennedy Jr of Citizen’s Energy Corporation points that where 85 million barrels per day is traded in a market that buys and sells a billion barrels a day – meaning each barrel is turned over at least 10 times.

Estimates run between about $0.50 to $1.00 per gallon is paid by consumers to cover the profits made by this excessive trading.  That’s why the Obama administration has been cracking down on speculators to the extent that it can.

But this alone does not explain the volatility in oil.  Part of the problem is that there are dormant wells everywhere, particularly in Texas and Oklahoma, that are not profitable unless oil is at the upper end of its current range.  Oil does not simply bubble out of the ground most of the time – it has to be extracted with pumps, steam, or other methods.  Every well has a price for operating it, and no one is going to pull oil out at a loss.  When the price goes up, production rises – which sends the price down again.  A properly functioning futures market would even this out, but it clearly does not.

Clearly, there are two problems here.  Production costs are uneven and the futures market is run by people who care more about money than oil.  Even without the gaping maws of speculators, the diminishing resource would not trade evenly in the best of circumstances, however.

The only true solution are new sources of fuel.  As written here, cheap natural gas can be made into gasoline by a number of methods – some of which are expensive and difficult.  But the price of oil is high enough, on average, to justify some fairly extreme methods.  What we talked about earlier this year is fast becoming a reality, even without the latest in technology.

This is very important to our economy, and not because it will provide cheaper gasoline.  In fact, it won’t bring the price down as low as many think.  What this does is set a floor in the cost of gasoline probably around $3 per gallon no matter what.  New technologies might bring it lower, but what makes new sources of gasoline from natural gas viable is the high cost overall – driven at least in part by excessive speculation.

Note that it is completely ridiculous to assume that more drilling will solve the problem, especially since most new wells are tapping resources that were deemed too expensive in the past – perhaps because they were deep in the Gulf of Mexico, among many reasons.  The only things that can change this is a crackdown on speculation and new sources of supply.

We will all benefit from stable gasoline prices because costs for everything transported (i.e. absolutely everything) will be more stable.  That’s important.  It may not be as low as some think, but it is likely to drive the speculators out of business even if laws lack the guts to do it.

17 thoughts on “Breaking the Oil Cycles”