The woman ahead of us in line at the convenience store had a bit more than the impatient, bored look we all shared. She held her head high and spoke to the cashier in a friendly tone, paying for the gasoline she was going to pump. Like many people at this store, in this part of St Paul, she paid with cash – but hers came in crisp twenties slid neatly out of a bank envelope. After we paid our own way out of the line I asked my daughter if she noticed. “My guess is she just cashed her paycheck because she doesn’t have a bank account,” I told her. It was a good guess, because it turns out that more than 17% of that particular neighborhood’s households have no bank account – and many rely on the UnBank check cashing up the street.

There are many reasons people don’t have bank accounts, up to and including the fact that check cashing stores can actually be cheaper than fees on everything. But some people wind up using these places for a “Payday Loan”, or a one-month advance on the next paycheck. A recent study shows that people who do this have to take out another loan the next month to pay off the first, and so on – with 62% eventually hitting 7 or more months in a row, the point where the interest payment exceeds the loan amount.

Money when you need it! (but it’ll cost ya)

The Payday Loan industry is organized and unapologetic. On their website you’ll find a biweekly newsletter full of interesting links and fun facts. There’s also a great app for looking up the “unbanked percentage” in any target community – where I found the data above. In St Paul, for example, 8.2% of all households are “unbanked”, pretty close to the US average of 7.7%. You can also buy a chain of payday loan stores, if you’d like, and sample an impressive collection of scholarly studies on the industry.

The Consumer Financial Protection Bureau (CFPB) released their study of the industry, and the findings are more than a bit shocking. They followed “loan sequencing”, or how many times a payday loan is rolled over before it is finally repaid. They don’t include interest rates, since they vary a lot, but with fees and interest they estimate that 7 months rollover on a loan is about 100% of the original value – suggesting a net annual rate of just under 200%.

That may sound like an insanely lucrative business, but with a default rate of 20% and a lot of fees paid on the checks they handle the operations do have their costs. It’s very unclear how much is made from payday loans.

But for the borrowers, the results are very obvious. “This renewing of loans can put consumers on a slippery slope toward a debt trap in which they cannot get ahead of the money they owe,” CFPB Director Richard Cordray said.

Many payday borrowers live on fixed monthly incomes, such as retirees or disabled Americans receiving Social Security disability benefits. Of those payday borrowers receiving monthly payments, the study found that one out of five borrowed money every single month of the year.

“These kinds of stories are heartbreaking and they are happening all across the country,” Cordray said. “They demand that we pay serious attention to the human consequences of the payday loan market.”

What can be done about this often predatory private industry? The industry newsletters show that many states, even rather conservative ones like Alabama and Idaho, have passednew regulation on payday loans and unbanks in the last year. But the most comprehensive proposal floated yet has been to allow the Post Office to expand into more financial services. 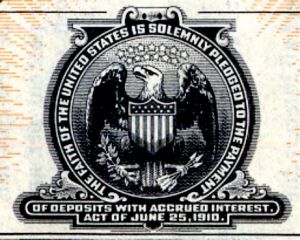 The seal of the Postal Savings System.

It’s not a radical idea at all. There was a Postal Savings System in place from 1910 to 1967, when it was abandoned due to unpopularity. It provided basic banking services for the very poor, but it did not offer loans. The latest proposal for a postal banking system would include “small loans” of an unspecified amount at a low rate of interest.

Senator Elizabeth Warren (D-MA) is a strong backer of this system, seeing it as a chance to fix two problems at once – provide financial services without predation for the “unbanked” and have a new income stream to help keep the Postal Service solvent. But the idea has gone nowhere.

Meanwhile, payday loans are being issued with high interest and a high tendency to rollover into a debt that is twice as large as the original loan amount. At the very least it’s dangerous, but more importantly it takes money away from the people who need it the most. In some parts of my town, and yours,too, that can make a big difference for the whole community.

The woman in front of us that day looked too much like she had her life together to be someone who takes out this kind of loan, but you never know.  Many people don’t have a bank account, and there’s certainly no shame in paying for everything in hard cash.  I only hope that a sudden emergency doesn’t tie her to the system that can drain that cash very quickly and take that dignified, polite bearing away from her.

If you like this blog, please vote Barataria “Best Weblog About Politics” in the 2015 Bloggies.  It only takes a few minutes.  Thank you!