This is a repeat from two years ago, but I think it should be said often – especially this time of year and with the horrible politics we have lately.

Empathy. It’s a powerful concept that’s become one of the hot buzz words at the end of this year. Much has been written and said about it lately, and for good reasons. Our politics, which is little more than the collective values of people forced to share a social space with each other, is often rightly criticized for lacking in basic empathy. The message of Pope Francis comes down to a call for more empathy for those who are in pain, not power. But what is empathy?

There are many ways to define it, but the simplest is “The ability to share another person’s emotions.” Empathy defies not just logic, but space – it’s about stepping outside of yourself for at least a moment. It’s a connection to the pain that others feel beyond any logical argument. And true empathy comes when you can do this for people you otherwise don’t even like.

The lack of empathy goes many ways, however. This Christmas is a good time to truly practice empathy.

More than a hand up

Barataria has made a lot out of the economic improvement that is taking hold and making a solid foundation. That optimism now bubbles over into the popular press, too. Income inequality has become a hot topic in large part because we can see some people doing better while others are left behind. The world is moving ahead, if slowly, and millions around the world are being lifted out of poverty.

This is the social and philosophical side of the restructuring that Barataria has long predicted would come out of this depression. The downside pitted “us versus them”, but the rising upside will naturally seek a bigger definition of “us”.

I was going to write a nasty, satirical piece about the “War on Christmas” that is being ginned up by certain quarters again this year – in many ways stronger than ever. But it’s not in me. I am a natural empath, a person who is often overwhelmed by my “read” of others’ emotions to the point of paralysis. There are always many ways to look at a situation, and from where any one person is standing there is a point to be made. The nasty just isn’t in me and I won’t do it.

The truth is that the world is changing very rapidly as the three great forces that define our situation wash over people’s lives. Some people are utterly unprepared for this, having come from a position where they were right in the middle of a common culture that was defined by the same systems of rules and beliefs that they learned as children. To wake up one day as an adult and have the world tell them they are wrong is unfathomable.

So they lash out in strange and irrational ways. Some media outlets can make use of this confusion and anger by cranking it up into a movement of sorts that they define and lead. They turn the powerful emotions of betrayal and loss into a kind of cult that is permanently pissed off and itching for a fight at every turn.

People in this state naturally lack empathy. They are busy trying to desperately hold on to the myths and arrangements that once only made perfect sense in their world. That’s not to excuse their behavior and it’s certainly despicable that corporate outlets try to make a buck off of their hurt as they crank up the backlash. But the emotions are genuine and the hurt is real. It’s also entirely predictable and even reasonable in a time of rapid change in nearly every aspect of the culture.

So how should an empath respond? Let’s start with the basics. 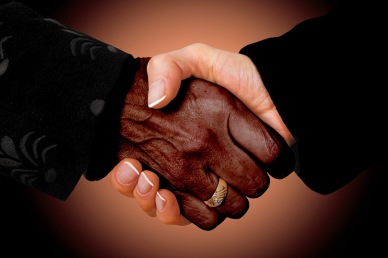 Let’s start with Respect and build from there.

Selfishness defines the common culture of the US in ways that would appall anyone ripped out of history from the Founding Fathers on. A land based on strength through unity can never see freedom as a call to grab whatever you can and insist on your moral “rights” without understanding social obligations and the need for, at the very least, respect. So let’s start with that – it’s not all about you, it’s just not that kind of party. And a little respect goes a long way.

How do we build real empathy from that? I would say that as we approach Christmas the example taught by Jesus of Nazareth is an excellent start. If you want empathy, you must practice it – especially with people you don’t even like. We have to understand that some people who appear to have everything going for them – pale skin, a decent income, and so on – might be utterly blinded by a world that they simply do not understand any longer. Being “right” in your own mind counts for just about nothing, especially if you don’t believe it counts for anything in the mind of people you disagree with.

A week before Christmas, let’s all try to give the one gift that can change the world. It’s the gift of empathy, or making a point of stepping outside of yourself for a while and caring for people that otherwise really upset you.

The peace that you bring by doing this is more than a gift to the world, it is ultimately a gift to yourself that you can keep sharing. It’s worth the effort.