Christmas is a time for remembering everything that has come before us. It’s not a kind of memorial day when we remember what we lost, but instead a day to remember the great gifts that have come to us over the many years. The circle of gratitude is widened every year as the holiday expands with new love and new memories.

This is a special Christmas because fifty years ago we received one of the great gifts of television, “A Charlie Brown Christmas”. In many ways this defines the tension of Christmas itself, even though very little in popular culture has been willing to decry the commercialism that is the true “War on Christmas”. And in the process it gave us a new definition of holiday cheer, bringing Vince Guaraldi’s cool jazz into the warm holiday like a sprig of winter itself.

The cover of Time Magazine on 9 April, 1965. It launched the strip into the stratosphere.

The project started in the Spring of 1965. Peanuts was the hot comic strip of the day, appearing on the cover of Time Magazine on April 9th. In a quick rush to cash in on the fame, Coca-Cola called producer Lee Mendelson, who had made a documentary about Schultz and Peanuts. They wanted him to make a special in time for Christmas. Mendelson said he had an idea for one, even though he hadn’t even contacted Schultz yet.

But the idea was a good one, and Schultz was quickly interested in the project. The script came together in just a couple of weeks, and had only one hitch – Schultz, a good St Paulite by birth, wanted the special to focus on what Christmas was all about. He insisted on the theme of commercialism killing Christmas and the passage from the Gospel of St Luke 2:8-14 (KJV)

And there were in the same country shepherds abiding in the field, keeping watch over their flock by night. And, lo, the angel of the Lord came upon them, and the glory of the Lord shone round about them: and they were sore afraid. And the angel said unto them, Fear not; for, behold, I bring you tidings of great joy, which shall be to all people. For unto you is born this day in the city of David a Savior, which is Christ the Lord. And this shall be a sign unto you: Ye shall find the babe wrapped in swaddling clothes, lying in a manger.And suddenly there was with the angel a multitude of the heavenly host praising God, and saying, Glory to God in the highest, and on earth peace and goodwill towards men. 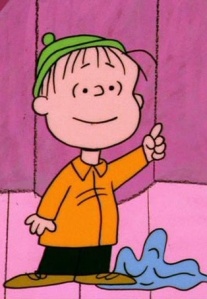 Adding at the end, “…That’s what Christmas is all about, Charlie Brown.”

That wasn’t the only chance they took. It was Mendelson’s idea to use the music of Vince Guaraldi, who wrote the piece “Linus and Lucy” along with other incidental music. Exactly why he thought of this is not recorded, but it’s clear that they were pushing this special to the very edges of a rather conformist world on the edge of change.

Legend has it that when the CBS executives saw it they were horrified. Overt Christianity? Anti-consumerism? Jazz? No laugh track? It broke all the rules. Supposedly it was already announced and printed in the schedules with no time to change it before it aired on 9 December, 1965.

It was an instant hit. Pre-empting The Munsters at 7:30 EDT, about 45% of the television audience watched it that night. Critics were unanimous and immediate in their praise, with Rick DuBrow of United Press International predicting, “the Peanuts characters last night staked out a claim to a major television future.”

There is no doubt that it has become that, but what about the central message? What came of the idea that Christmas is a moment of peace and commercialism can ruin it? While “A Charlie Brown Christmas has been repeated at least once per year on network television, now for 50 years, has that message been taken to heart or picked up by a new generation?

The short answer is that as much as we love this show it remains almost alone in its simple and clear message. That’s a shame, but we still have this masterpiece.

How can the circle of peace and love be widened as we embrace this great tradition? The answer is in all of our hearts, just as it was in Charlie Brown’s. We all know the answer. What’s beautiful about “A Charlie Brown Christmas” is that it teaches us what we already know without a lecture or a harsh judgment. And that’s what love is all about, Charlie Brown.