Home » Money » Starts With an Idea

When Martin Shkreli was arrested the internet erupted with a dark sense of joy. Finally, the most hated pharmaceutical and finance guy in America was going to get justice – if not for raising the price of drugs 5,000% but for an unrelated ponzi scam.

This came up during People’s Economics, the discussion groups which represented a kind of “Barataria Live”. Our section on High Finance asserted that the complex and overlarge finance system inherently encourages this kind of bad behavior, which is to say that any regulation or law you might write is irrelevant compared to the kind of damage guys like Shkreli can do before they are caught.

Two interesting thoughts came out of this and subsequent discussions which provide logical ways for us to get past this problem and move to a better future. And there may be more. 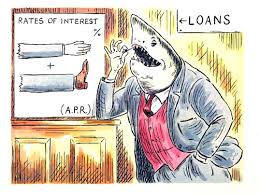 Do not feed them. Please.

The first consideration has to be how we can avoid the sharks that make up the world of high finance and take care of ourselves. The term I favor is ‘resilience”, or building up a store to last through any bad situation.

After talking about this with a friend who is a financial adviser I am please to tell you that this is exactly what people in their profession do for a living – that is, when they do it well. Every corner of the finance industry has its share of sharks, of course, so finding the right financial adviser who is working to empower you can be tricky. Far too many are in the biz only to sell the financial packages that give them the best “vig” or commission.

No matter what, however, approaching this from an empowerment perspective highlights the real problem with a financial world that is too powerful and too selfish to be useful. What is needed, my friend told me, is far more financial education – something that is woefully lacking in this country to this day.

Which is to say the real problem is that the sharks can be in a position to take advantage of people only because they don’t know better.

The financial pyramid. It’s built on a solid foundation.

Real financial planners, I’ve been told, start with the basics of building resilience by emphasizing savings and insurance. The goal is always a secure and comfortable life which start with making sure that the basics are covered. After that, and only after that, comes investing and growth towards a comfortable retirement and maybe more, if you have the scratch for it.

You may have heard all of this before. I have, too. But remarkably few people have and even fewer know how to act on it. Want to reform the financial system? You better change your mind instead, to mis-quote the Beatles. This concept of empowerment and resilience through education is worth talking about a lot more as we make it part of whatever systems we build in the future.

We’ll come back to this.

Another key contribution from the audience came in a discussion of too much credit available today, as we have discussed before. Kathleen, the very talented brewer who is one of the owners of Sidhe Brewing Company, our wonderful host, challenged my statement that it’s up to consumers to just say “no” to credit. “How will we start and grow a small business?” she asked. My lame response was to say that we need to reduce our credit by about half. But I’ve thought of a better one since.

Equity at its best is partnership.

There are many signs that there is plenty of money available – we’re just lacking in desire to loan it out. Low interest rates create what’s called a “liquidity trap” – a situation where the net return from a loan is so low it becomes hard to justify taking on the risk. And there are many signs that money has only gotten cheaper as time goes on.

So why not flip the script and not make loans at all? Rather than debt, equity may be the wave of the future. That means that an investor, or perhaps even a credit union, doesn’t make a loan but instead takes a share of the business – and the profit. It’s about becoming a partner, not a creditor.

It’s hardly a new idea, and in the Muslim world where interest is banned it’s almost mandatory. But it also a new way of thinking more than anything else – a way to create a new financial world one partnership at a time.

Making these two simple ideas a reality may be another thing. But this is why it’s important to keep talking – to keep brainstorming. What will the next economy look like? Let’s start with what it could look like.

15 thoughts on “Starts With an Idea”