What is a fair corporate tax? It’s a hot political topic, but one loaded with a tremendous amount of mis-information. On the left, it’s common to cite “loopholes” which allow corporations to “offshore” profits and dodge taxes as a result of corporate lobbying. On the right, the extremely high corporate tax rate of 38%, nearly double the worldwide average, is cited as a major problem.

Both statements are greatly limited at best. US corporate tax law does not contain “loopholes” but a series of structural deficiencies derived primarily from being hopelessly antiquated. Any discussion of the tax rate misses the main issues entirely, as the definition of “profit” – more accurately, definition of “income” and “expense” – is the core issue.

Any reasonable discussion of corporate taxes has to start with the fundamentals. What is a corporation? What is profit? Who benefits? What needs to be done?

We are all in this together.

It’s important to start with the primary purpose of a corporation. It is an entity defined by law to hold assets and liabilities apart from the individuals who own it, allowing them to act as a unit for their own purposes. Their individual responsibility is shielded when they act as a “Limited Liability Corporation”, or LLC, which is to say any one person’s potential liability is generally limited to their ownership stake.

There are exceptions to this in the case of criminal actions, but they have to be proven in court. Holding an owner, part-owner, or shareholder responsible for the actions of the company is difficult.

There are two types of corporations in the US. The traditional company is what we call a “C-Corp”, which comes from Subchapter C of the US tax code where the limited liability provisions are defined. In 1958, a new kind of corporation was created, the “S-Corp”, where the income operates as a pass-through to the owner(s) every calendar year. This gave small shops, tradesmen, and farmers the same limited liability rights as big companies. The S-Corp is not subject to corporate taxes, as profits are realized as individual income for taxation.

Partnerships function the same as an S-Corp, but the profits are divided among the partners according to their ownership stake. 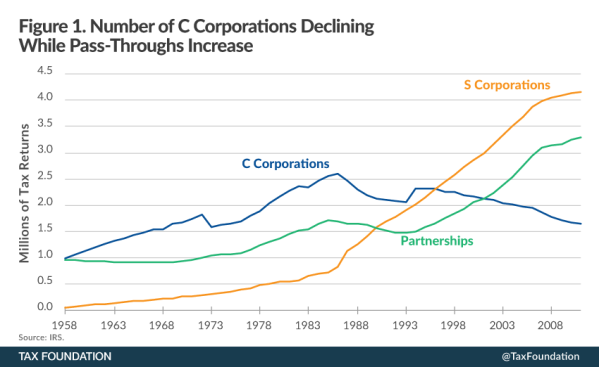 Corporations by year, from the American Tax Foundation.

If a company has a fixed ownership, which is to say it’s not based on traded ownership shares, it makes no sense to incorporate as a C-Corp. Payments to shareholders, or dividends, are not deductible by the corporation and are taxed both as corporate income and then as individual income by the person who receives them. This is referred to as “double taxation”.

The net result is that anyone who can incorporate as an S-Corp will do so. That explains the decline of C-Corps in number – but they still account for 30% of corporate income.

Corporate tax law therefor only applies to large, traded companies or subsidiaries of large companies where the S-Corp “pass through” to individuals does not apply. Of those, the number which as listed on some kind of stock exchange has also gone down to 3,700, about half what it was at the peak in 1996. They are a tiny fraction of the roughly 9 million total corporations.

It goes without saying that corporations this large operate internationally, which takes us to the depths of US tax law. The definition of “profit” for the purposes of taxes on a C-Corp is the difference between income and expenses realized by that company all over the world. Any company which is founded in the US is subject to US taxes under this law.

While this “worldwide” system used to be standard, very few nations have systems like this anymore. Nearly all of our developed trading partners have switched to a “territorial” system, where the local subsidiary of a multi-national corporation is taxed based on the profits they realize in that nation. US based companies pay taxes in the nations they operate, and under US law they receive a credit for that tax against the taxes they owe here.

This is where we get what is commonly called an “offshore loophole” that is hardly a loophole but instead a structural problem with corporate tax law.

What everyone wants – until the tax bill comes.

Profits realized overseas are not taxed as long as they stay overseas. Since nearly all nations except the US have the same “territorial” system, these profits can be moved to any overseas subsidiary without further taxes – but cannot come back to the US without paying up. The “penalty” for bringing that money back home is the difference between the tax in the nation it was first realized and the US rate – typically about 16%.

The total amount of money which has been realized, and taxed, as profit by US companies outside our borders is now estimated at $2 trillion.

This is far from the limit of the problem, however. Apple incorporated their Irish subsidiary, known as AOI (Apple of Ireland) back in 1980. They built a manufacturing plant near Cork, so there was nothing strange about it. But there are many quirks in Irish law, and Apple found a big one. A company is a US company if it was founded here, but a company is Irish if it does its operations in Ireland. AOI, founded in Ireland, now operates almost excluively in Cupertino California, meaning it belongs to no nation – and pays no taxes. It also happens to be the center for all of Apple’s European operations, meaning there is no corporate tax on iPhones sold in Europe.

Long ago, IBM was the “Big Brother” threat. Not so much anymore.

It is worth noting that Apple pays taxes on its US profits. The profits they realize overseas, from AOI and other subsidiaries, stays overseas.

It is also possible to move products around from one company to another across international lines to avoid taxes. Under the same Irish law, a company not doing substantial business in Ireland, chartered in the Caymans, can realize profits and be subject only to the Caymanian tax rate – nearly zero. Because Irish law is full of holes, any business operating in the Eurozone can easily dodge taxes legally by going “Double Irish” and shuffling profits around.

Here in the US, however, it is more difficult to move money around to avoid taxes. That’s not to say there aren’t ways of doing it.

Taxation is based on profit, which is to say the difference between income and expenses. Income is provable enough and hard to dodge. Expenses, however, are a very different matter. The cost of doing business is can be open to a lot of interpretation.

Let’s say you are a foreign company which makes android phones. You sell them for $100 each through a US subsidiary subject to US taxes. The cost of your office, sales, advertising, et cetera is $30 per phone. So who’s to say you don’t buy them from your home manufacturer for $70 each, making absolutely no profit whatsoever?

Such an operation inflates the “profit” made by the company at home, but if they come from a nation with a low tax rate – Ireland, again, is only 12% – they save a bundle. And if they can route everything through their holding company in the Caymans, well, they pay essentially nothing in taxes to anyone.

US companies rarely go to all this trouble, but they can move their “headquarters” overseas. This is called “inversion” and it comes down to the definition of “headquarters” and “founding”. Medtronic, for example, is now technically an Irish company and doesn’t have to pay US taxes on their $4.7 billion in profits.

The difference between the Irish rate of 12% and the US rate of 35% amounts to over a billion dollars per year to Medtronic. It’s worth it.

The problem for the US is not only our rate but our antiquated system. We also suffer, as all nations do, from the lack of an international agreement on what a corporation is and what it means to realize a “profit” for the purposes of taxation.

It is clear that an international agreement is necessary and that the US is going to have to adopt a “territorial” system of taxation. The definition of “profit” will have to be laid out in such a way that the price of goods cannot be arbitrarily fixed to manipulate the system. And this will almost certainly have to be done under the auspices of the World Trade Organization (WTO) because any nation operating outside of any agreement will have to have additional tariffs placed on their products to avoid cheating.

Such an agreement is only being talked about in vague terms, and no one has proposed any kind of comprehensive effort to create one. If such standards were developed, the technicalities would swamp highly unpopular “trade” deals which delve deep into legal definitions such as the Trans Pacific Partnership (TPP). That agreement is already a dead issue politically. Finally, a broad agreement would almost certainly mean a net loss of “sovereignty” to anyone who wants to express it that way for political purposes. 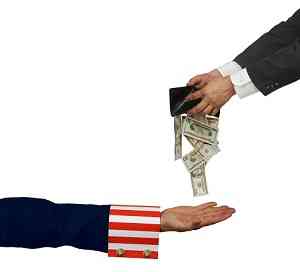 Oh, it’s not this bad. It just feels like it.

In the meantime, a “territorial” system could be defined by the US and an appropriate tax rate could be found. There are no good estimates on what revenue this would bring, however, as it is unclear what subsidiaries of foreign-based companies can or should be paying versus what they do today due to the heavy shielding from US tax law.

Lastly, whatever rates are picked they do have to in some way make sense compared to the individual tax rates, given how many S-Corps there are in the US.

Corporate taxation is far from a simple matter. Free trade without any agreement on fundamental definitions such as “corporation” and “profit” has created a system which is structurally flawed at the core. Methods of escaping taxes can hardly be called “loopholes” as they are practically a feature. Focusing on tax rates doesn’t even come close to anything resembling a fix to the problem

Meanwhile, companies can avoid taxes any time they think they can get away with it, which is to say any time they can avoid bad press. As more and more companies do this the more it becomes standard practice. The impetus to dramatically reform our entire corporate tax code, from the bottom up, grows every year.

The goal? Fair taxation on profits, however we can define that. The details? There are many before we get anywhere near the finish line.

To me, that involves not only repealing most of the corporate tax code as we know it, but setting it ablaze on the Capitol steps in a ritual act of purification once we have achieved the lofty and very important goal of a solid, fair, and modern system.