Perhaps you believe, as many people do, that the largest banks in the nation such as JP Morgan and Goldman Sachs should be broken up. They are simply “Too big to fail” and the cost of a bailout by taxpayers to avoid a systemic failure is too great. Who should break them up? The federal government, by legislation? The Federal Reserve, by regulation?

How about the free market – because they are not as profitable?

For all the shouting and consternation about big banks, one simple fact has gone overlooked. With their tremendous size and ability to “make the market”, as shown by the “London Whale” incident, they do not actually rule the world. They are about as profitable, and usually less so, than smaller banks. The reasons are not obvious but they are demonstrated. And those who should be doing the shouting are not the “99%” but the shareholders. 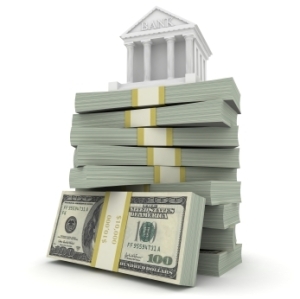 It’s interesting how the traditional view of a bank looks like the Parthenon.

It’s important to understand the forces at work which drive banks to become ever larger. There is a basic overhead cost to running a bank which is actually quite large. They have to have staff to work with customers, handle transactions, and comply with regulations. They must have basic access to the market with computer systems. All of this costs money.

Like any business with an overhead, the larger the amount of money processed the more “the nut” of opening the doors is covered with economies of scale.

Banks have been under a lot of pressure to merge and grow since 2008. Profitability has been lagging for a whole host of reasons usually summarized in the industry as one simple mantra. It’s very convenient to blame the additional regulation imposed by the Frank-Dodd requirements imposed after the big meltdown. More regulation means a larger overhead, which puts pressure on banks to grow. The net effect of regulation like this is counter-productive, the argument goes.

There is some truth to this, but it is far from the only pressure that banks face.

A study by the Bank of International Settlements in October 2015 titled “The influence of monetary policy on bank profitability” showed that lower interest rates were the dominant force pushing down bank profits. Regardless of size, the researchers found that:

… higher rates and a steeper yield curve boost profitability. This reflects two contrasting forces. On the one hand, higher short-term interest rates and a steeper yield curve increase banks’ net interest income, as they raise bank interest margins and returns from maturity transformation, respectively. On the other hand, higher interest rates increase loan loss provisions, consistent with their impact on debt service costs and default probabilities, and decrease non-interest income, because of their negative impact on securities’ valuations. Thus, the effect on net interest income more than offsets that on non-interest income and provisions.

In short, higher interest rates have a two-fold effect of boosting bank profitability – they bring in more money and the “spread” can widen to accommodate higher risk. The low interest rate regime since 2008 is in part fueling the risk aversion we see in the market while it also encourages banks to merge in the belief that larger banks are more profitable – as per the argument above.

But there is no reason to believe that is true, however. A paper by the Kansas City Federal Reserve in June 2016 titled “Has the Relationship between Bank Size and Profitability Changed?” showed that where banks pre-2008 could indeed see greater profits as Return on Average Assets (ROAA) up to $2.5 billion in assets, today the profitability curve levels off around $1.5B in assets – and then drops as the banks become larger: 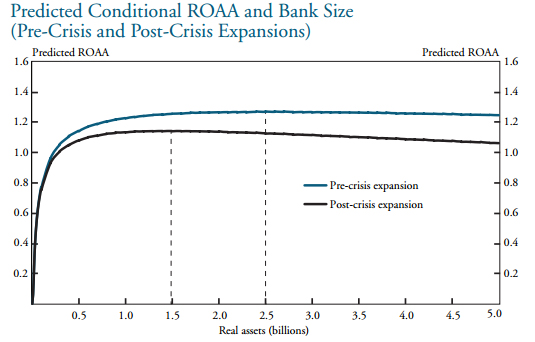 Bank assets in billions of dollars vs expected return on assets, from the Kansas City Federal Reserve paper.

How is that possible? Risk. For all of the chances to gain more money in larger markets, the time horizon becomes longer. In a rapidly changing world that implies more risk, meaning that big gambles are inherently riskier gambles. With proper diversity it all evens out as lower profits.

There is now a dis-economy of scale weighing in as well. Size does not fix all problems.

We can see this in another paper recently published. The Brookings Institution published last week titled “Have big banks gotten safer?” shows that the stock market is aware of the problem. The “beta”, or relative volatility of bank stocks versus the whole market, went from 1.18 pre-crisis to 1.59 during the crisis to 1.23 today. That means that bank stocks, on average, are 23% more volatile than the rest of the market. 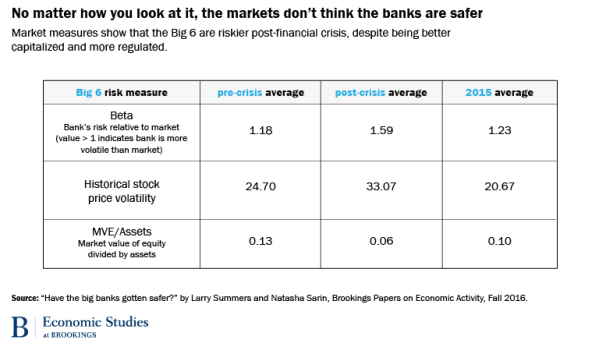 Before, during, and after the panic bank stocks are not well regarded by financial markets. From the Brookings Institution Paper.

Their market value as a percentage of assets shows this, too. Coming in at a paltry 10 cents on the dollar, the value of bank stocks is down considerably from their pre-crash 13 cents. The market seems to think that, in general, banks are ten times more valuable broken up for cash than they are as a going concern. That’s not a lot of faith.

Ideas usually come to those who are busy working, actually.

But don’t we need big banks to package and produce new innovative credit and investment tools for consumers? Isn’t there still great value in being able to off a wide ranging portfolio of tools for your customers, something a smaller bank can’t offer?

Not any more. The hottest thing in finance these days are what are called “fintech” companies or financial technology. These are essentially brokers which help arrange credit and investment by “bundling” up smaller transactions and selling them on the market – using internet tools, not the presence of a bank. As summarized in a paper from the Chicago Federal Reserve entitled, “Shifting Ground: The Changing Landscape in Financial Markets and Technology,” the effect is tremendous:

Because banks have access to existing customers and inexpensive costs of funding, partnerships with fintech businesses can be mutually beneficial. Conference participants noted that, for instance, many community banks do not offer online loan applications, even though consumers increasingly prefer them. Some representatives of fintech companies contend that by integrating fintech into existing banks, it can help traditional banks capture additional customers or serve current ones more profitably.

There is no cohesive argument in terms of profitability or services for a bank to be larger than about $1.5 billion in assets – about the size of a small credit union.

For all the concerns about risk at big banks, the situation is clear. Too big to fail is one thing, too big to understand, as we’ve argued before, is another. Growing complexity does not mean growing profit – it can, in fact, mean lower profit from higher operational overhead and more risk processing all the transactions.

Because of changes in risk and new technologies, if anything there should be a trend to smaller banks, not bigger. The market may be slow to understand this as the urge to merge remains the panacea of choice to fix the flagging profits of banks supposedly weighed down by too much regulation.  But it is market forces that are the real culprit – and, as usual, the best path to salvation.

Low interest rates and competition from fintech are the real problems facing banks, and they are not going away. If small community banks can continue to prove to be more effective at handling risk in general, keeping it closer than arm’s length, the days of big banks may indeed be numbered.

The problem isn’t “Too big to fail”, it is “Too big to be profitable”. The place for the real action isn’t Capitol Hill but Wall Street.  Four academic papers published over the last year confirm what the market already knows – even if no one has acted on it yet.

7 thoughts on “Simply Too Big”