How would you like to have a car which gets better than 50 miles per gallon? Such cars exist, and are actually rather common in Europe. Why aren’t they sold here? They are essentially illegal, thanks to some very tight regulation. They are diesels, and as such run in Europe on a fuel which by law includes 15% minimum biofuel, a renewable resource.

But efficient engines like this run at higher temperatures and pressures, meaning they essentially burn a little nitrogen and thus produce more Nitrous Oxide, or NOx.

This is at the heart of the infamous Volkswagen “cheating scandal”, which was indeed a terrible moment. But now that Chevrolet’s small diesels may be guilty of the same thing, it’s worth talking about.

Diesel engines have never been popular in the US for a lot of reasons. Historically, they were nasty brutes that were nowhere near smooth enough to be considered for cars. They are heavier, louder, and to top it all off need a different fuel altogether. The advantages, found in better low end torque and efficiency, were always good for large trucks – but despite a few tries, never passenger cars.

That has all changed with some sophisticated engineering. Many things have been perfected in recent years, most notably reliable turbochargers and precise computer controlled fuel injection. The end result is an engine smooth and comfortable enough for a car. The additional cost has been offset by rock-steady reliability and a general trend by consumers to favor cars which last 250,000 miles and more.

In Europe, road fuel has always been much more expensive. There are many reasons for this, most notably the complete lack of desire to subsidize roads with other taxes, particularly property taxes. Cars are required to pay their own way in Europe, a far cry from the roughly 50% subsidy that is typical in the US. Other taxes to support transit are indeed on top of that, but the cost of roads dominates the heavy European tax bill per liter.

On top of this, fewer refineries operating less efficiently and other challenges add a lot to the cost for simple motoring fuel. The net result is a tab typically three times what it is in the US.

The VW TDI engine. It looks the same, but it’s a precisely engineer marvel.

To meet this need for greater efficiency, European engineers have indeed developed cars which routine get mileage 2-3 times better than in the US. The development of high mileage diesels has been critical to this effort. Such engines run in a very different cycle than a gasoline engine with much higher heat and pressure. This is absolutely critical because there is simply no other way to have a higher efficiency engine in a car.

That process, however, converts some small amount of nitrogen to poisonous Nitrous Oxides or NOx. It can’t be avoided. And that’s where the US standards become strange.

In the US, a car is not permitted to emit more than 0.2g of NOx per mile. In Europe, the standard is 0.8g per mile. How were these standards set? It’s completely unclear, but clarity is critical understanding where it came from. 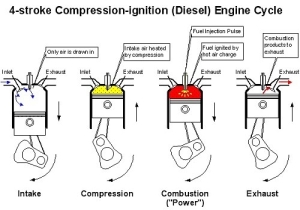 The Diesel Cycle is different from the Otto Cycle of a gasoline engine.

Urban smog has two major components. They are unburned fuel, or hydrocarbons, which generate the grey haze you may see over a city. NOx is a brown haze and it creates acid rain in the form of nitric acid. It’s not as bad as sulfuric acid, now greatly reduced in our fuels by regulation, but it’s still not good.

Why is the US standard set lower? My hunch is that brown smog is more of a problem for us, particularly in the big bowl that defines Los Angeles. Certainly, with more cars running as a primary means of transportation, the net total of all NOx coming out is going to be higher.

But it’s still unclear why our standard is set so low that high efficiency diesels are essentially banned from the US. Truck diesels, for example, have to meet a standard of 2.0g per mile, which is ten times higher.

This is why Volkswagen cheated so horribly at their emissions testing for the US market. Their behavior was reprehensible all around and involved a massive conspiracy among thousands of people who actively destroyed documents and clearly knew what they were doing was wrong. But it was the only way that high efficiency cars could come to the US at all.

Chrysler, which makes a lot of small truck diesels, appears to have done something similar. It’s not forgivable behavior but it is understandable. Innovation in a key area leading to lower Carbon Dioxide emissions, lower consumer cost, and a real shot at energy independence has been stopped.

Should we have such a low NOx standard? I have no idea why it is set as low as it is, to be honest. But that is what stands between American consumers and truly efficient cars. And there is no way around it. It’s one of those many little things that we, as a people, should be talking about but aren’t.