Is the appearance of the swastika and the chanting of a Nazi slogan so far over the line that the normal rules do not apply?

Generally, I believe so. But it begs the question as to what is “normal” and what are the “rules”. Citizen activism is a critical part of the processes of our democratic republic. In an age where nearly everything can be weaponized, from the deadly use of a car on a crowd to any statement twisted for use against anyone a clear understanding of the lines is more critical than ever.

Losers marching in Charlottesville for a cause which lost.

My personal position on the use of Nazi rites has been made as clear as I possibly could. This essay is part of a chorus of other people, left and right, who clearly understand that Nazism is in no way compatible with Americanism – or, for that matter, reality. The nation has spoken rather clearly everywhere except in the White House. The line has been carefully drawn even if some people aren’t quite bright enough to realize it.

There are some forms of expression, let’s call it “speech,” which are not protected by the Constitution. Among them are “fighting words,” which were defined by the Supreme Court in the 1942 ruling Chaplinsky v. New Hampshire.

There are certain well defined and narrowly limited classes of speech, the prevention and punishment of which have never been thought to raise any Constitutional problem. These include the lewd and obscene, the profane, the libelous, and the insulting or “fighting” words — those which, by their very utterance, inflict injury or tend to incite an immediate breach of the peace. It has been well observed that such utterances are no essential part of any exposition of ideas, and are of such slight social value as a step to truth that any benefit that may be derived from them is clearly outweighed by the social interest in order and morality.

US Soldiers heading towards Omaha Beach

My contention is that the presence of a swastika causes immediate and reasonable fear of bodily harm for many people, and therefor by itself is “fighting words.” This is reinforced by the 400,000 Americans who died fighting in World War II and a clear definition that this is a banner of war, not political thought.

The last line of the opinion, however, should give us all pause. It’s all about a “social interest in order and morality.”

In the case of Charlottesville, defining Nazi slogans as a prelude to violence becomes easy given the use of a car as a weapon of terror, killing Heather Heyer. The epic struggle over ideas which is going on around the world has gone so far beyond any sense of basic human decency that absolutely everything can and will be weaponized. 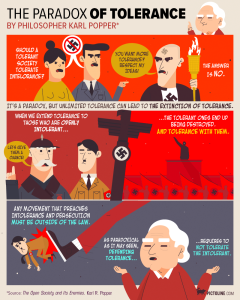 Values cannot exist in a vacuum. If anything, the belief that ideas are more important than humanity is what got us here.

Away from the immediate threat of death, even words are easily weaponized. For example, a video is circulating of then Sen Clinton commenting on the death of Sen Byrd (D-WV) calling him a “friend and mentor.” This is obviously a simple act of decency on the passing of a colleague. But it is presented as part of a more sinister chain – Byrd was once a member of the KKK, a stain which can never be removed, so Clinton’s praise shows …

I have no idea what it is supposed to prove by these unreasonable leaps of logic. What matters here is that decency itself can be weaponized.

What, then, becomes a reasonable threat to public safety and therefor the immediate threat posed by “fighting words?” In the wake of Charlotesville, many attempts at “doxxing” or outing those participating have been made. Many people have lost their jobs over this. But given a complete lack of any due process, it should come as no surprise that some people were incorrectly identified.

Who is the judge pounding the gavel?

Cloudfare dropped the website of Nazi group Daily Stormer, but then quickly realized the problem. CEO Matthew Prince made his qualms clear. “Having made that decision we now need to talk about why it is so dangerous. … Literally, I woke up in a bad mood and decided someone shouldn’t be allowed on the internet. No one should have that power.”

With words that put us into a “bad mood” a nearly constant fixture in our lives the power of denying services or employment has to be considered. Words are easily weaponized, yes, but what crosses the line?

I have no doubt that the swastika is over that line. But in a time when everything can be used to start a fight or take a life we need to understand just where the line is.

Or, better yet, stop being so quick to weaponize the language we need to debate and achieve consensus as one people, united and free.