President Trump spoke to the UN today. In all fairness, it could have been worse. And, in many ways, it was a re-iteration of what America has been saying for a long time – we have a big military and we intend to use it, but don’t ask us for money to keep the other operations going.

Yet it was bad enough in one singular sense – there is no place for globalism even as we realize larger threats to the entire planet at once. It was a summary of everything that he and his followers stand for in many ways. But what will it mean to the rest of the world? 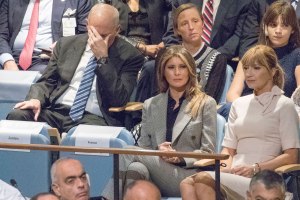 John Kelly facepalms. We all do from time to time.

The main message is that the US is going to take care of itself, primarily. It’s hardly a new message but it was on display in vivid words this time. Chief of staff John Kelly was among those who weren’t impressed by it, famously burying his head in his hands at one point as Trump used the term “Rocket Man” to describe North Korean leader Kim Jung Un.

It was a moment for everyone to cringe, yes. But it wasn’t the only one.

The main point was that we’re not in it for ourselves. The US is now modeled by its desire to take care of itself, not the rest of the world. The signature quote is this one:

We can no longer be taken advantage of, or enter into a one-sided deal where the United States gets nothing in return. As long as I hold this office, I will defend America’s interests above all else. But in fulfilling our obligations to our own nations, we also realize that it’s in everyone’s interest to seek a future where all nations can be sovereign, prosperous, and secure.

Signing the Peace of Westphalia. When the modern world was invented.

In other words, you’re all on your own now. The word “sovereign” appeared many times in this speech, emphasizing the main problem with the world as we know it. The fundamental line for everything is this concept of a nation-state, and despite all of our problems it still seems to be in everyone’s interest to cobble together responses on an ad hoc basis.

That may well be the right thing to do most of the time. No matter what, though, there are longstanding problems with nations who are trouble and there is no mechanism for dealing with them. Trump himself went down a long list of them.

But it was all prefaced with this statement:

The United States is one out of 193 countries in the United Nations, and yet we pay 22 percent of the entire budget and more. In fact, we pay far more than anybody realizes. The United States bears an unfair cost burden, but, to be fair, if it could actually accomplish all of its stated goals, especially the goal of peace, this investment would easily be well worth it.

Nevermind that this is about our share of global product, making it more than “fair”. And nevermind that this is still a paltry amount of money compared to what needs to be done in the world. Why, it would take a long time to list the problems with sovereign nations that … well, he took that time. Great. And he also included this:

The United States has great strength and patience, but if it is forced to defend itself or its allies, we will have no choice but to totally destroy North Korea.

So what’s the problem with nothing but “soveriegn” nations? A lot of people in the audience added the US to the list after hearing that, which is not good at all.

Granted, it’s up to globalists like me to come up with a viable alternative, and we haven’t. International organizations are difficult to patch together in any meaningful way. It’s also impossible to make them truly democratic in nature, given the seven billion people on this planet. So how are we supposed to make things work?

Talk about the promise of the UN, complain about the price, and then tell everyone we’re just going to spend our massive military budget taking care of what we want to. That’s how we make it work. Right.

It’s hard to fault Trump for all of this. It’s really been our policy all along. We’ve just been nicer about it in the past and couched it in diplomatic terms. Does it actually make sense to simply state it up front, nothing hidden? Probably not. But it does nicely force the issue at hand – the world is a dangerous place and no one is here to make it otherwise.

That’s worth thinking about.

2 thoughts on “United Nations. Sort of.”