Friday the 13th just before Halloween – a good day for this repeat of my favorite post on my favorite musical score.

It’s the spooky season, but it’s also the fun season. Before Winter wraps its embrace around us there is Halloween, the last chance to have some fun. It’s a challenge to the eerie creep of darkness we’re still adjusting to, still resisting at least one last time.

No movie captures the season for me quite like “The Nightmare Before Christmas,” the epic Tim Burton classic of stop-motion animation from the old school. Released in 1993, it was immediately recognized as a great classic movie for the holidays – Halloween, for the fun of it, and Christmas for the cynically twisted reaction to what it has become.

What makes this movie, however, isn’t just the great story and animation. The score by Danny Elfman is pure genius – and belongs in the repertoire of classical greats. 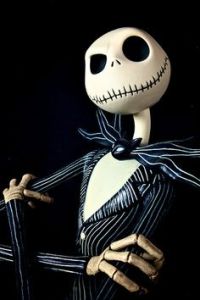 The ever stylish hero of Halloween Town, Jack Skellington

The story is far from simple. Holidays are created in “towns” that put them on, and there is trouble in Halloween Town. Jack Skellington, the creative force behind Halloween, is bored. Every year is the same, every year is just as ghoulish as the last. Fear just isn’t as frightful as it should be. Sally, who secretly loves him, decides to watch his anguish from a distance.

He takes a long walk through the night and arrives in the glitter of Christmas Town. Enthralled, he eventually plans to take over Christmas by kidnapping Santa Claus. Sally, who knows better, is powerless to stop it all. The result is such a mess that he has to confess his disaster, but in the end realizes how wonderful Sally is.

Yes, it is ultimately a love story.

The plot aside, the score for this movie is simply brilliant. Each scene has its own song, and every song has a central theme. They are all tied together by the Gregorian Chant “Dies Irae,” or “Day of Wrath”. The first four notes of this are shown below in Medieval notation – basically treble clef, with the F# that signifies the key of E minor noted with a simple mark at the top.

These four notes, and variations on them, wraps the whole movie together.

Here is the first long song, “Jack’s Lament,” which culminates in a beautifully animated sigh of despair:

In this song, “Dies Irae” is put into a strange Waltz. The theme is developed in 3/4 time with a pickup quarter into a half on the downbeat. It opens with a small variation on “Dies Irae”, up a minor third, and then develops with a little motion. Then, “Dies Irae” itself is repeated twice to fill out the theme. Here is the score, reduced to piano and vocal, with annotation:

One other time “Dies Irae” is put in the forefront is in the song “Making Christmas”. In this one, Halloween Town is put to work crafting the presents and decorations as a ghoulish elven workshop. In all of the movie, “Day of Wrath” is never more appropriate – and it is simply hammered home with a brilliant orchestration by Elfman:

These are not the only songs which contain clear references to “Dies Irae”. The despair of Sally, who thinks she is not good enough to reveal her love for Jack, is lamented in “Sally’s Song” – based on an inversion of “Dies Irae” in part – it rises where it should fall:

In total, the score is as much of a masterpiece as anything written by the great masters of the past. Danny Elfman is a great composer who has scored many films and also wrote the theme for “The Simpsons.” Nightmare, however, is clearly his masterpiece.

Rachel Barton Pine. She can make this the suite it needs to be!

I have dreamed of a suite of the tunes reduced for violin solo. Are you reading, Josh Bell and Rachel Barton Pine?

This movie of twisted fun is a lot more than just a “Day of Wrath,” of course. When Jack finally realizes what is missing from his life and right in front of him is Sally the movie quickly wraps up with “Jack and Sally’s Song”. Though the entire score is in a minor key, carefully exploring the many moods of minor, it has a surprise at the end. Just as Jack and Sally embrace we have the only major chord in the whole score – the very last chord, save the denouement with flowing strings that accompany the pan-out into happily ever after.

“The Nightmare Before Christmas” is more than a holiday movie in many ways. It is a small opera for our times, ultimately a comic opera that forgives you for laughing at the twisted fun. Nothing captures the spirit of Halloween better than this masterpiece.

Central to it all is Danny Elfman’s truly brilliant and inspiring score. Listen to it and you’ll have many tunes to hum as you stomp through the leaves. The “Day of Wrath” was never more fun and uplifting!

Reduced scores for piano and vocals for Jack’s Lament and Sally’s Song in pdf form can be found in these links.

One thought on “Dies Irae – Nightmare Before Christmas”