Home » Nooze » The Road To Hell

There is no excuse for the current policy at the US border with Mexico. It was indeed changed by the current administration in April, regardless of how Trump tries do deny responsibility. His Attorney General and Homeland Security Secretary don’t run from it.

But while there is no excuse for this policy, it is important to note that it is not particularly different from the horrors that our immigration laws have inflicted for at least a generation, if not longer. It is indeed an attempt to fully enforce existing law, a series of laws never fully put into place because they do indeed violate basic human rights. Never enforced, that is, until now.

The current violations of decency and due process highlight a dance that the US has long had with human rights violations. When the music stops it is long past time for us to review not just this policy but every aspect of immigration and border control.

America is bigger than you or I can ever imagine. We need to try to imagine it, however. That used to inspire us.

Anyone encountering Customs or ICE is having a bad day, regardless of who they are. When a border or immigration action is declared, all constitutional rights are effectively gone. You have no right to privacy, and everything can be searched. There is no fourth amendment. You can be held immediately, as the probable cause for suspecting you is simply being there at that moment.

This holds true for US citizens, legal residents, and those without documentation alike. One example of how impossible they are to deal with occurred in 1982 when nearly all of Monroe County, Florida, was held hostage by a “border check” on US1. The result was that Key West declared itself an independent nation in a desperate bid for publicity and help. The Conch Republic was born.

But that was nothing compared to what has been in the works since 1996. There was a large spike in migration from Mexico at that time, fueled by a serious agricultural crisis driven by agricultural mechanization and major economic reform. Millions were without work, especially those whose farm jobs were lost to machines. They came northward in a wave. 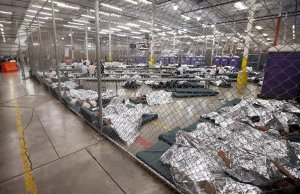 Current human rights abuses are a culmination of years of policy, not anything new.

They were met with the Illegal Immigration Reform and Immigrant Responsibility Act of 1996, passed by a Republican Congress and signed by Pres. Clinton. There is indeed plenty of blame to go around.

The bill made it easier to deport people and much harder for anyone to ever become an American citizen. The reason why there are so many people who have been in the US for 10-20 years without documentation, estimated to be over 60% of the 11M undocumented, is that there is no path to citizenship for them. The 1996 law closed them all down.

At the borders, things have also become much worse. Detention for nearly indefinite periods awaiting verification of status is common, even for those seeking asylum and supposedly protected by treaty obligations. Deportations have been rising more or less constantly since that time, especially for Mexicans. 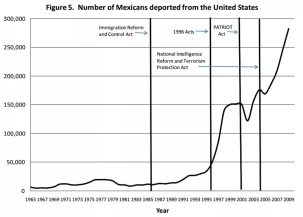 Deportations to Mexico. The net change in 1996 is very clear.

Since 2008, immigration from Mexico has slowed down as their economy stabilized. Today’s immigrants are from Central America, escaping violence in the region. Their situation is more dire and their journey to come here much longer. The process they are encountering is indeed less respectful of their basic human dignity, but it is not as much worse as it is commonly portrayed. Even without this new policy, they would be detained, treated like garbage, and probably deported.

What is the solution to this? In the short term, we must be more respectful and kinder. But in the long term the only solution is a North American one.

Together. It will be different.

History shows that a rich nation cannot remain stable when it has poor neighbors. It must either absorb them or give them opportunities to stay at home. It may sound appealing to place great machines of enforcement on the border staffed by people in uniforms, but this never works indefinitely. It certainly is not possible for any nation which is humane, decent, and a genuine beacon of freedom for the world.

Until we truly love our neighbors as we love ourselves, there will be problems like this. And there will be horrors if we cannot treat situations which arise with love. What is happening now rightfully reminds everyone of the Nazi era. But we came here from a place not as far away as you might think, and we came here quite willingly. Everything has to change to genuinely put a stop to this.

7 thoughts on “The Road To Hell”