An economy that is struggling needs an injection of cash to get it going again, at least according to basic Keynesian economic theory. That’s more or less what our government is doing right now, and  we’re running up massive debts in order to do it.  The biggest concern is how this debt will cripple the next generation when they have to pay it down.  Surprisingly, however, this may be a lot easier than we think because the USofA is, by one important measure, a younger nation than it has been in a long time and worth a significant investment.  The issue is, as always, what we get for our money.

This line of thinking starts from one interesting piece of information I gleaned from a report to the US Senate in 2006.  The chart below was taken from page 6 of “Age Dependency and Social Security Solvency” (pdf) by Laura B. Srestha of the Congressional Research Service (Library of Congress).  It shows the history and projections of the number of dependents non-working age people, the young and the old, per 100 people of working age in the nation. 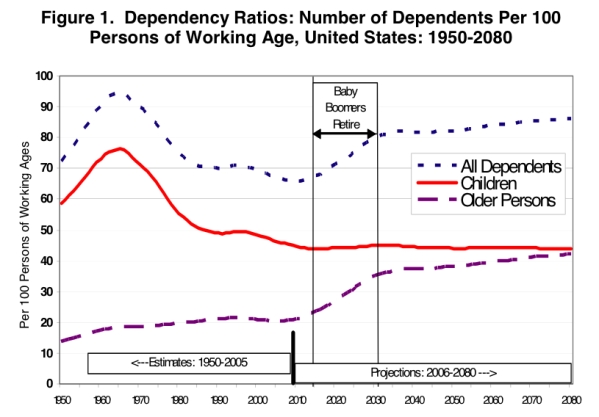 If you look at this closely, the number of dependents is, currently, at a historic low.  That means that we have more people of working age without someone else to support than we have as far back as we’ve kept track of these things.  In fact, by this measure we’re even better off than the 1950s, when there was a rapid rise of dependent children of the endless summer.

More surprisingly, the projected retirement of Baby Boomers is not projected to give us a dependent population that even comes close to the late 60s, when it peaked at around 95 dependents per 100 workers.

What does this mean?  A young nation is a nation that needs work, which is to say that the need for jobs that we see in this Depression is a feature that is likely to be with us for a long time.  Part of the issue we are facing right now is clearly demographic.  An investment in the economy, particularly jobs, is likely to have payouts over a long period of time.

The key is always what kind of investment makes sense.  I’ve been arguing that our infrastructure investments, public and private, are often not aligned with the developing social networks in the fluid world of the internet and need to change.  That’s one area of investment.  We also have to encourage flexibility in job creation to not only maximize the number of jobs that we have as well as their ability to change with new conditions.

Where this gets interesting is when we look at the expected changes in the US Dollar around the world.  We have gone to rather incredible lengths to support the buck over the last few decades, and I believe that we even started a war to keep it strong.  We have done this because a strong dollar allows us to buy goods cheaply from around the world, ranging from toys made in China to oil pulled out of the Venezuelan fields.  It has long seemed like a good deal.

That’s all about to change.  Right now, there is about $1.50 to the Euro, which is 25% more bucks than the single currency demanded when they first launched it 10 years ago.  We’ve fallen against every major currency you can think of, and in fact good from China now cost about 30% more than they did just 4 years ago.  This is likely to continue to fall as ForEx traders borrow money at roughly 0% interest here to loan in nations that have higher interest rates, like Australia or Indonesia.  It’s called the “Carry Trade”, and it means that cheap dollars will continue to not only jump-start our economy, but they’ll flood the world.  As it picks up, we can expect the buck to continue falling.

That means that we’ll have a weak currency.  It also means that imports will be more expensive, and that it’ll start to look relatively cheap to make stuff here in the USofA again. The problem is that you don’t just turn on a factory overnight, so we can expect it will take time and plenty of investment to turn on the factories that take advantage of this situation.

More to the point, that’s exactly what we need demographically, too.  Things are actually aligning quite well for a return to a manufacturing based economy in the USofA which provides good paying jobs.

The problems remain – we have too much overhead per employee, and we import too much energy to make this all work.  If we look to an even younger nation, Brasil, we see a nation that is committed to providing full employment and is energy independent – they are even more worthy of investment than we are right now.  But compared to major economies, and even compared to China and Russia, we are young and ready to work.  The right investments will make all the difference.

20 thoughts on “Young at Heart”