I’ve been thinking about money lately.  No, not just because I need more of it, but that haunts all of us from time to time.  I’ve been thinking about how the various attempts at making our US currency more colorful and difficult to slap into a copier and come up with a decent counterfeit have only highlighted how incredibly lame our currency is compared with other nations. 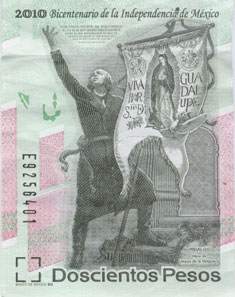 Mexico, our North American sibling, is celebrating its bicentennial with a fabulous 200 Peso note, pictured here.  Not only does it feature Father Hidalgo proclaiming independence, it does it with an audacity that hopefully can make the whole nation proud.  My guess is that they had the dramatic and beautiful image they wanted to use, but realized that it was too vertical to plunk in the middle of an ordinary bill without it becoming pathetic and lost.  The solution was to orient the whole bill vertically to the picture, letting Father Hidalgo take up half of the note in all his glory.

It’s dramatic, it’s gorgeous, and if it doesn’t arouse patriotic pride in Mexicans, nothing will.

From just over the Río Grande are notes often considered more desirable.  Our small portraits of Jackson are worth about as much as the 200 Peso note at purchasing power parity, but you wouldn’t know it to look at them.  Where Mexico and other nations have featured Poets and Revolutionaries, we have Presidents.  Tired, old, sometimes unknown people who are supposed to represent stability but often look simply worn.  Who are these guys?

The truth is, the use of the people on our bills was an act of political compromise dating to 1919.  The decision was to put the founders of the Democratic Party, Jefferson and Jackson, on the $2 and $20, with the first Republicans, Lincoln and Grant, on the $5 and $50.  The $1, $10, and $100 were given to non-partisans and Federalists Washington, Hamilton, and Franklin.  Once again, the American spirit of compromise got everyone past a difficult decision – and straight into major boredom.

No other nation has this problem.  Poets often feature well on currencies alongside founding revolutionaries.  I remember fondly the 10 Deutschemark note with Karl Friedrich Gauss, a mathematician, or the 20 Austrian Schilling note with Sigmund Freund.  These said something about the people that crafted and used them in a way that mere Presidents only hope to.

How do we ditch the bills we have?  It starts by setting up an outline of all the security strips, magnetic ink, and other details that make them secure and countable in big piles by machines.  After that, the faces we use can be changed out with one gorgeous portrait after another, teaching a bit about our culture and encouraging people to collect them the way they do measly state quarters.  This is the USofA, after all, so it’d never sell without some kind of windfall to the issuers.

I suggest that we consider forgetting the $1 and $2 and issuing the $5, $10, $20, $50, and $100.  We can have series based on different kinds of heroes that define who we are as a people.  For artists, I would suggest Mark Twain, Scott Joplin, Emily Dickinson, Ansel Adams, and Georgia O’Keefe – but your mileage may vary.  I only ask that we have a bill with a portrait of Scott Joplin on the front with the first eight bars of “Maple Leaf Rag” on the back, ready to be pounded out on the piano by anyone willing to try.

After that, a series of scientists would be just glorious.  Imagine a bill with Edison on the front and the patent for the light bulb on the back, or Einstein (a naturalized US citizen!) and an illustration of relativity on the back.  We could also have a series of important activists, such as Alice Paul, César Chávez, Dr. Martin Luther King and, if we can get it past the Republicans, Harvey Milk (it’s worth a try).  The possibilities become endless.

This may seem unimportant, but it’s not.  Money is, no matter what, a statement of values and faith.  Are we a people characterized by who we elected or by the people that inspire us?  Dead presidents may have been a decent compromise, but they aren’t who we are.  Let’s have money that says more about the people of this great land than the politicians – if we really want to say it’s ours and not theirs, that is.