How are things going?  Without useful data, it’s nearly impossible to make good decisions and adjust accordingly.  The most surprising thing about the decade-long downturn in the US economy is that the bottom line data, real (inflation adjusted) Gross Domestic Product, has been a moving target.  Data has been constantly revised downward for as far back as 2003 through last month.

With the first revision to the second quarter 2011 GDP figure due on Friday, we can only expect the very worst.  But that’s not all there is to this problem. A look back at how far it has all been revised down shows just how bad things have been for the last decade – and how policy makers never saw it happening.

The GDP calculation has always had a certain amount of fudge in it.  It’s not easy to add up the total product of a nation into one big number for starters, and the more the Bureau of Economic Analysis (BEA) explains it the less clear it becomes.  But they do their best and we have to accept that as long as they use the same methods each year we can at least figure that the net change has most of the errors canceled out.

The most recent figures going back to 2001 for year over year net growth in GDP (as a percent)  can be found in one handy graph from the St Louis Fed, as always.  Shaded areas are the official “recessions”: 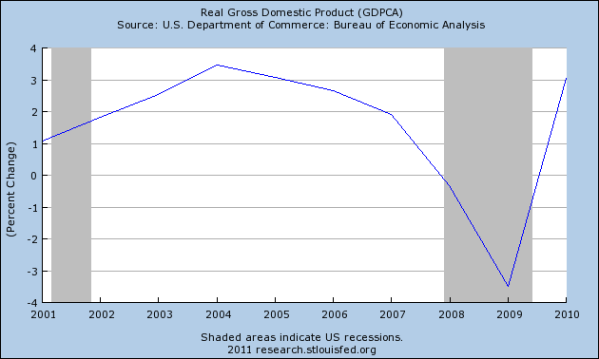 There are several horizontal lines that you can draw on this graph.  The most obvious is at zero, showing where the economy contracted with net negative changes in 2008-09.  Another line can be drawn around 2%, which is roughly the net population growth of the nation every year – if the economy isn’t growing as fast as the mouths we have to feed, we know that we are slipping.  A third line can be drawn at 3.3%, which is roughly the point where we see net job growth based on a regression of all data since 1946 – a level of growth we only barely touched once (in 2004) during this entire decade.

The net result?  Over the last decade our economy has grown at a net of about 1.6% per year.  That is assuming you accept the relatively low estimates for inflation that the BEA uses, which are rather inexplicable.

Why have all the revisions been solidly down?  A cynic might say that no one pays attention to the revisions, so it is possible to puff up the news cycle with a wildly optimistic number you can correct later.  I have yet to hear the non-cynical, technical case for why the revisions are not only consistently down but down considerably years later.  It’s enough to make anyone a cynic.

Given the Federal budget deficits considerably higher than growth as a percentage of GDP through most of this period, cynics have a lot of reason to not believe anything.

What we do know for sure is that the lack of job growth through the last decade has finally been matched to GDP numbers that clearly show how bad it’s been.  What you may have felt in your guts has finally, years later, been confirmed by the BEA – economic growth has been essentially nonexistent for a decade.

Watch on Friday for the net revision for the second quarter, which initially stood at 1.3% year over year growth.  If that is revised much lower we can expect more panic in the stock market – and revisions have only been down for quite some time.