“I knew it was time to leave when I realized I could no longer look students in the eye and tell them what a great place this was to work.”  So says Greg Smith, until today the head Goldman Sachs’ equity derivatives business in Europe, the Middle East and Africa.  This relatively young man who was working his way to the top very quickly simply walked off, leaving behind a scathing resignation letter – that he sent to the New York Times.

You can read the entire piece here, and it’s worth the time.  There isn’t anything particularly new in it for those of us who have been watching Goldman for years, but the details are chilling all the same.  They may be what gets the world moving toward correcting the problems that are not just at Goldman, not by a longshot. 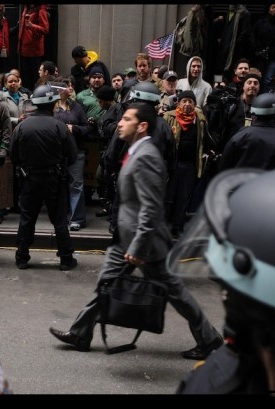 What was the final straw for Smith?  He doesn’t tell us, but he was very disturbed by the overall picture. “I can honestly say that the environment now is as toxic and destructive as I have ever seen it.”   It is all about making money, not doing what was right for the customers they apparently loathe.  “Over the last 12 months I have seen five different managing directors refer to their own clients as ‘muppets,’ sometimes over internal e-mail.”

Smith also makes reference to “Fabulous Fab”, Goldman Vice President Fabrice Tourre, who famously boasted in an internal email sent in January of 2007, just as everything was starting to fail:

“More and more leverage in the system, The whole building is about to collapse anytime now! Only potential survivor, the fabulous Fab standing in the middle of all these complex, highly leveraged, exotic trades he created without necessarily understanding all of the implications of those monstrosities!!!”

Five years on and Smith finally had his fill.  He apparently expected everything to change after 2008 or so, and it hasn’t.  It took him this long to make up his mind and he has.  We don’t know what salary he is walking away from, but you can easily guess it is not a small one – so it took him a while.  No matter.  He did it.

How will this public rebuke from the inside change anything in our financial system?  It is very hard to tell at this point, especially since this does little more than confirm what most people who watch this closely already knew.  We are far beyond “too big to fail” or even “too big to understand” – we blew through those warning signs years ago.  The biggest, baddest firm of them all is full of people who don’t care at all.

One thing does stand out from Smith’s 12 year career – he can’t be any older than his mid-30s. How does such a young man get such a high paying job with so much responsibility in a firm like Goldman?  The answer is clearly that aggressiveness and creativity are what they value the most, likely burning out execs like Smith quickly when they become a bit older and wiser.  Finance is not a career for staid men of substance, working their way up slowly.  The days when banking was boring, as it should be, are long gone.

Where does that leave those of us who are on the outside?  There is nothing that we can do to change the culture or practices at Goldman, unless of course we have a big account with them.  We might be able to propose some regulations that will make things tougher for them, but those are not likely to do anything to change the internal culture that Smith rails against.

What we can, and must do is take steps to limit the power of this organization and learn what they do.  We must never think that these people create jobs, innovate important new products, or in any way improve the lives of people around the world.  The problem at Goldman is culture, according to Smith, and the problem outside of this “toxic” firm is also culture.  Elevating finance companies to the status of Gods only gives them a way to spread their disease and infect the whole world.

Goldman exists to make money any way they can.  We should see them as a potential source of  revenue, having no other potential public good other than what we squeeze out of them.

“Goldman Sachs today has become too much about shortcuts and not enough about achievement.”  Whatever Smith was being paid, it became clear to him that he wasn’t actually earning it.  He shows in leaving that a moral, decent person can’t stand that situation forever, enticing as it is.  That’s the big lesson for all of us – inside Goldman and out.