Black Friday is well named.  The term seems to originate with the Philadelphia Police, who in 1966 started to dread the massive disruption in traffic that put them all on overtime the day after Thanksgiving.  The massive public expense for the benefit of retailers was given the dark moniker because it was something that the city wanted to dissuade.

It’s worth noting that this was the first holiday retail season after the debut screening of “A Charlie Brown Christmas” in December 1965, which also decried how commercialism has destroyed Christmas.

From this simpler time, things have only gotten worse.  After a few decades of tacit acceptance of the dark day, the hours have been pushed back from a 6AM start time to before midnight.  This year, Wal-Mart plans to open at 8PM on Thanksgiving Day and workers are organizing a strike that may shut the whole operation down.  The issue?  Over work, under pay – and much of the cost of low, low prices ultimately born by the public.  It’s time to put a stop to Black Friday as we know it.

It is not clear how many Wal-Mart workers will hit the picket line rather than the check-out line this Thursday, but anger is boiling over across the US.  It’s not that they don’t want to work – many are long term employees who have been with the company for years.  But they also have to rely on public assistance to make their $8.50 an hour paycheck stretch to feed a family, and now are being hit with proposed rising health care costs.  Taking Thanksgiving away from their families was simply the last straw, it seems. 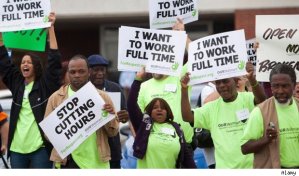 This may not seem like a public issue on the face of it, but it very much is.  The inability of a company to pay a living wage puts pressure on public services of all kinds.  Extra police needed to control crowds is a public expense worth avoiding.  And some basic standard of decency – a holiday off with the family – has to be the smallest thing we can expect if we are going to claim to be a society that really does value families and hard work.

The focus on Wal-Mart is narrow, but it follows the basic principles of organizing.  The chain has been consistently the most out front and egregious on workers organizing and trying to make a decent living plying what they consider their trade.  By attacking the problem with low pay for the working poor at the most visible and possibly worst place, the organizers are igniting support across the nation.  “Pick the target, freeze it, personify it, polarize it.”  A victory here would turn around the whole sector and make a very bold statement.

In the end, this is not a simple action taken by workers against a single employer.  Back when the day was first decried there was, at least, Thanksgiving.  This sacred holiday has been trampled by those who simply want to make a buck off of it.  It would be hard to legislate that everything should be closed on Thanksgiving, given that there is some need for support of weary travelers and those who are orphaned and alone over the holiday.  But laws and other standards are called for when basic decency fails.  The planned action, in support of families, can hopefully stop the trend of destroying Thanksgiving before it gets out of hand.  It is good for everyone.

What this highlights, however, is the tremendous social cost that we all bear by a constant drive for lower retail prices and general support of an economy based on consumption.  It’s more than the cost in dollars for the children of underpaid workers and the police – it’s the cost to all of us as our great traditions are eroded.  What we lose in family time and cultural values is priceless.

Part of the solution, of course, is for everyone to boycott not just Wal-Mart but all stores, at least until 6AM on Friday.  One day per year, less than 0.3% of all the days, is not much to ask as a break from relentless consumerism.  It is something we should all insist on.  If you honestly want to be a part of the rush on Friday you’re more than welcome to it, but please, for the sake of decency, hold off until then.  That’s all I ask.

But this erosion of our basic values has been in the works for 50 years, despite protests and attempts to curb it.  Any progress we can make to turn the tide back and instill some decency back into the season is valuable.  Wal-Mart workers need our support, but so does everyone.   Let’s get back to what is really important as the days grow shorter and the season of lights arrives.