Avast, ye dogs!  So you live on a small rock with no resources and a pretty hard life.  Ships loaded with treasure go past all the time, hardly protected by anything other than a navy which you can spot over the horizon.  What do you do?  For big hunks of the Caribbean and many other parts of the world, the answer for many was to turn to piracy, or at least turn a blind eye to it.  Rich nations could afford to give a little bit to the cause and, as long as the gunships were far away, life was pretty easy.

Those were the good old days.

Some tiny nations that used to be havens for pirates have found a new, more lucrative way of making a living out of nuthin’.  Rather than prey on the wealthy, they help hide their wealth – not under the “X” on a treasure map, but in a real bank operated far from prying eyes (and taxing ledgers).  An estimated $32 trillion (as of 2010) is hidden away in the tiny nations on the fringes of civilization.  It’s an issue which is becoming as hot as the Caribbean sun in most of the developed world, especially the UK.  But what can be done about it?

The estimate of how much is hidden away came from a Tax Justice Network (TJN) study in 2012.  It included a warning that got everyone thinking.   “On this scale, this ‘offshore economy’ is large enough to have a major impact on estimates of inequality of wealth and income; on estimates of national income and debt ratios; and – most importantly – to have very significant negative impacts on the domestic tax bases of key ‘source’ countries” The estimate is twice the size of the US GDP and almost entirely unknown and untaxed – until now.

In the shadow of a G8 summit that pledged to do something to find this hidden tax revenue, the International Consortium of Investigative Journalists released a vast database of all this hidden wealth that is notable for one particular reason – it is vast.  Over 2.5 million shadow companies and their estimate worth are listed in locations like the Cayman Islands, British Virgin Islands, and even Singapore.  There is no “smoking gun” to implicate any one big company because, simply, everyone does it.  That’s the main reason why there is little new outrage in the US – there’s no one in particular to blame, so the story is far from sexy.

The UK, however, is going after this.  Chancellor of the Exchequer (Finance Minister) Alistair Darling is on a “Blame and Shame” campaign to identify companies one at a time and get them to sign a pledge to stop avoiding taxes.  It’s already gotten Starbuck’s to chip in £5M where they paid nothing for five years as an estimate for … well, it’s a round number.  Whatever.  Some other big companies are going to own up to the shame and cough up random amounts in the near future.

As a solution, however, this is ridiculous.  For a better fix, there is almost certainly going to be a push for some new cooperation between developed nations and new pressure on the tax havens.  Like piracy, the practice of hiding money only works when you are far away from scrutiny (and the threat of guns). 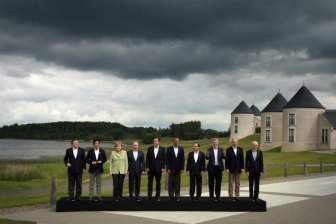 But how could this possibly work?  The G8 punted on the issue for now for the simple reason that the existing global free-flow of money and trade makes it impossible to really do anything about the problem without a concerted effort.  And that has never been in the works.  As the TJN noted:

In principle, institutions like the World Bank, the IMF, the US Federal Reserve, the Bank of England, and the Bank for International Settlements not only have ample analytic resources, including scores of economists. They also have much of the data needed to estimate this sector more carefully.  For reasons of their own, however, they have tolerated the growth of the offshore sector far too long.

We can guess what those reasons are.  But the issue is finally reaching the point where the institutions are willing to do something about the problem.

It’s a matter of fairness.  If only big companies can evade taxes, small companies will wind up paying more.  It’s being made into a big issue in the UK – and may yet be a big story in the US.  Like piracy, the real story needs a flashy figure like Blackbeard before it’ll catch public attention.  And all those people working places like Miami to push the money offshore aren’t very romantic swashbucklers in any sense of the word.  But the principle is the same – even if it’s only the very rich that benefit from this form of Caribbean lawlessness.