The news of George Zimmerman’s acquittal on all charges related to the death of Trayvon Martin bubbled through the sultry summer air.  Millions were angry and took to venting themselves on social media, but thankfully not with violence in the streets.  Millions were angry at those who were angry, generally claiming that racism works both ways.

There were so many things that fed into how it all went down on Trayvon’s last night on earth.  Florida’s horrible gun laws certainly made conviction nearly impossible.  They were born of a cultural PTSD endemic in a land wracked by violence that crackles with fight-or-flight adrenaline at the first sign of trouble – a biochemical instinct that sometimes becomes addictive.  I’m also sure that once the Sanford cops learned Trayvon was from Miami they were ready to assume the worst about him.  But all of that only amplifies and distorts the core problem, that of White Privilege. 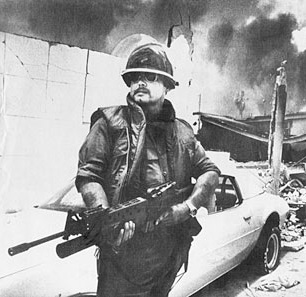 When I was Trayvon’s age, my pale skin often boiled red in the thick sun of Miami.  I often joke that any flesh paler than I mine is often regarded as a medical condition.  I can’t claim to understand or really be able to comprehend just what White Privilege is, but I can assure you I have relied on it.   I lived in a world where many weren’t so lucky, and race stalked every conversation and chance encounter in a city that once burned for three days when the police were acquitted for beating Arthur McDuffie to death.

I leave it to the great Leonard Pitts to explain how it relates to this case:

Why did Zimmerman regard Trayvon as suspicious when all he did was wear a hooded sweatshirt while walking in the rain? Why did initial police reports designate Trayvon the suspect when he was actually the unarmed victim? Why was his assailant able to go home that same night?

Trayvon’s parents have consistently rejected any notion that race played a role in his death. It was a smart position, reflecting a recognition that when race enters the conversation, reason often exits, compassion following close behind.

But truth is, race has been there at every turn. If man and boy had both been black or white, we would never have heard of either. There likely would not even have been a shooting.

George Zimmerman consistently got the benefit of the doubt all the way through this terrible event, and yet the tragedy was founded on his inability to give Trayvon Martin that same consideration.  A young black guy?  Must be trouble.  A simple assumption accelerates into a terrible collision.  Once Trayvon is dead, it unwinds back again through the benefit of doubt given and the man who did the killing allowed to go home.

Very few people openly doubt that White Privilege exists, but yet society as a whole is still incapable of comprehending how simple yet terrible it is.  If you are not as pale as I am, you know to act differently, as LeVar Burton blankly told us recently.  Those like me, pay attention, because if you never worried about being shot by the cops – that’s White Privilege right there.

This is something you learn when you are young and, like all boys about to be men, a bit stupid – but hopefully not so stupid you wind up dead before becoming wiser.  Parents who once railed against the injustice in their own youth try to worry the lessons into their children so that they stay safe.

Don’t act up.  Be respectful.   Keep your cool, it may be the one thing that keeps you alive.

Yes, there was so much more to this crime scene than just the lack of the benefit of the doubt that comes with darker skin.  As with any crime scene, there are means, opportunity, and motive – even in a sense more social than concrete.  The means was a series of laws that enabled a PTSD adrenaline junkie to hop up for an evening of “Crime Watch”.  The opportunity was a young man walking home.  The motive was a simple lack of any benefit of the doubt, a paranoia that said a black kid in a hoodie was trouble.  And it all rolled forward from there.

White Privilege is hard to understand because it is easy to make far too much of in quieter times.  Getting past it is not about guilt or any other self awareness that crawls into its own backside.  If anything, it’s about getting over yourself – standing outside of your own pale skin the best you can.  It’s in times of action that it turns into something that self awareness and control can make all the difference to stop from being another tragedy.

What matters most is that being angry is not the solution to this problem or the challenge of confronting White Privilege in any situation.  It is a little tiny thing, and yet it somehow often boils into something hugely unpredictable and violent.  Preventing that boil over in the heat of a summer night deep in the thick air of Florida, and around that nation, is what we should all focus on.

Honesty makes a good start.  White Privilege is real and defines our world.  Let’s deal with it.