I believe that I am due a few vacation daze in the summer, especially when I’ve had a long, bad day.  Here is a piece on my city from 2010, in part to commemorate National Night Out.

I came home from a meeting with a client and there they were.  A whole team of guys with buzzing and growling equipment filling Irvine Park with motion and clouds of dirt.  It wasn’t an unusual scene, since the Parks Department does their share to mow regularly – but these guys were different.  It was some private company out trimming and mowing and generally making our li’l park look better than it has in a long time.

What makes this a Saint Paul Moment wasn’t clear until I asked one of them what happened.  Did the city contract out the maintenance?  No.  “The owner of our company’s son is getting married here this weekend, and he wanted it to look nice.”  So he just set his crew loose on our public park and made it look great. That is a Saint Paul Moment.  You just do it. 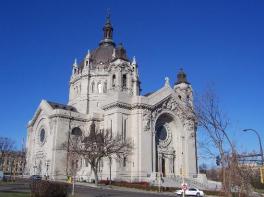 The Cathedral of St Paul

This isn’t the only moment like this on the West End, aka West 7th, here in Saint Paul.  The entire Irvine Park neighborhood is a collection of houses up to 150 years old that were once the crummiest neighborhood in the city – until the local residents got organized and fixed it up.  The city put in their part by helping buy homes and clean up Irvine Park itself, but it was mostly done by people just doing what they thought was right.  You want it nice?  Go ahead.

Since that time, the Fort Road Federation, which is the local district council, has redeveloped a number of blocks.  All of these started with neighbors who simply wanted to clean up the ‘hood.   For all the projects like Superior Street Cottages and the Brewery Breakthrough – and today Little Bohemia or renovating the Schmidt Brewery – the core of it has always been people who wanted to make things nice.  They went ahead and did what they could, and when the project got too big they asked for help.

What makes a Saint Paul Moment is some gut instinct to make things nice and decent.  Complaining about what other people are supposed to do is simply not an option in this town, at least not in my ‘hood. More to the point, it shows.

It’s not all work, however.  The flip side of the Saint Paul Moment came just last night at the wonderful German restaurant down West 7th called the Glockenspiel.  There was a guy at the end of the bar enjoy the fruits of German barley and my date and I simply started chatting with him.  It turns out he was in town from San José for a conference out in Minnetonka, the very rich suburb 20 miles west.  He was bored.  Returning the rental car to the airport brought him through Saint Paul and he just had to stop to see what this beautiful brick town was like.  He was having a good time with the bier and an enormous sausage platter that was kind of a wurst case scenario for the guts.

But the point is, he liked our efforts right away and stopped in.  That’s the Saint Paul Moment at the other end.  People notice what we do.

I’m sure this happens in other cities and neighborhoods, so it’s not entirely fair to pin it to my own li’l world.  What makes the Saint Paul Moment for me is that it is definitely a part of our way of life – something we value and promote as little more than what anyone is supposed to do and be.

Saint Paul Moments like this happen all the time simply because they are who we are.  I love this city because life is made of these kinds of moments where things simply happen because someone made it so.  And why not?

6 thoughts on “A St Paul Moment”