The news whacked Wall Street and set off a slide of 1.4%.  WalMart, the biggest retailer, reported slow growth and earnings below expectations for the second quarter.  “The retail environment remains challenging in the U.S. and our international markets, as customers are cautious in their spending,” according to Chief Financial Officer Charles Holley.  Should we be worried about it?

Probably not.  While a turnaround consumer spending would be the quickest and easiest way to goose the economy and put people back to work, it shouldn’t come at the expense of fundamentals such as repairing household finances.  A little caution now could make for a stronger economy in the long run – and that picture is continuing to look a bit brighter.

The details on WalMart are not as awful as the slide in the DJIA would suggest.  Revenue was up 2.4% but same-store sales were flat, meaning that people are not really spending more.  We can see that in this graph of year over year change in consumer spending adjusted for inflation from our old friends at the St Louis Federal Reserve: 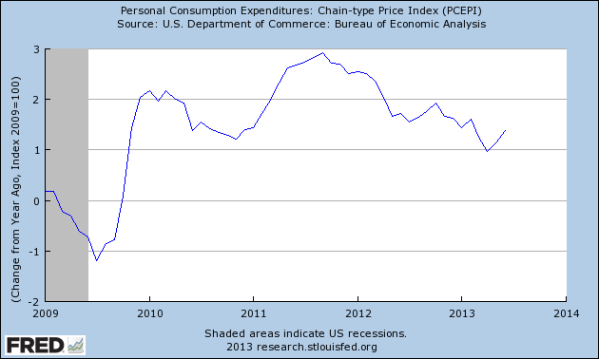 Inflation adjusted spending is rising at just 1.5%, down from the recent peak in 2011 near 3%.  The trend appears to be running downward, suggesting that consumers are more than just cautious – they are actively trimming their expenses.  If you’re in retail it certainly looks like bad news, and should be taken as such.  But how bad is it?

The San Francisco Fed released their forecast for the rest of the year, and they predict economic growth to pick up from the surprisingly strong 2.3% recorded in the same quarter.  The rest of the year should see us edging towards 3% gains, which would be healthy enough to see a good pickup in employment.  But it’s not showing up in consumer spending – despite a decent uptick in consumer sentiment as noted here earlier.

Where is the money going?  The average household in the US has a lot of debt to pay down and very little in savings.  Improvements in those areas as unemployment gradually edges down may not make for a robust recovery now, but people are still cautious.  The payoff will come much later, as we have been predicting in Barataria.  It’s a matter of literally getting our houses in order first.

The trend may well be our friend

There is a lot more to it than that, of course.  1.5% growth in consumer spending isn’t much, but it’s better than the flat performance WalMart is seeing in their same stores.  After inflation, they are pretty much treading water like so many of us.  That means that WalMart’s share of US retail is not growing any longer, which can be taken as good news by many of us.  There is additional room for small retailers and perhaps even craftspeople to take up the slack that is developing.

This should be taken as good news overall.  That’s not a political slam to WalMart, but a statement of reality.  Local businesses reinvest in local economies, meaning that the money that’s out in the US beyond Wall Street has a good chance of staying out there.  The concentration of wealth that has marked the last several decades could be slowing.  That can only be a good sign for the economy in the long haul.

It’s easy for those who own stock in WalMart to lament the situation, and they probably should.  Part of the economic restructuring that is slowly taking place may indeed involve a return to cautious spending and less interest in mass produced consumer goods.  That is consistent with an aging population with an awful lot of Baby Boomers looking towards retirement in the next decade.  Slower spending combined with the prediction of relatively low inflation is a trend that we can expect to continue for a very long time. 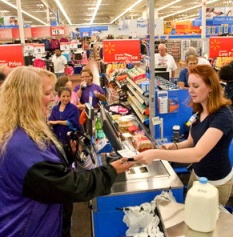 No one actually likes long lines

So what is WalMart going to have to do about it?  I don’t know and I don’t care.  The age of the big box as an engine of growth is probably well over now.  They are not necessarily a good indicator of the future of retail as the economy starts to change over – even if economic growth starts to pick up.   They may still cause Wall Street to swoon over one less than stellar quarterly report, but it is still not the story that is worth following.

The restructuring is continuing, and it looks like it is moving away from WalMart.  That can reasonably be taken as a good thing.  Let’s cheer it on.