Every once in a while Barataria has to take a pause from deep economic rumination. It’s time rundown the odd stories that may not have received enough attention elsewhere. There is a lot of news in these chaotic times that smells like it may be important one day but hasn’t quite bubbled up to the level where it hits the mainstream yet. This is just one of those days. 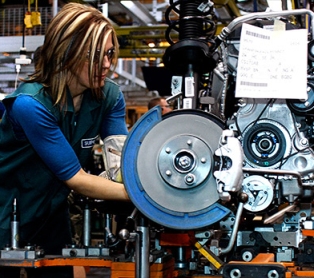 The jobs are there!

The good news this week is a bit troubling in the short term. ThomasNet.com, a manufacturing trade magazine, reports that 237k manufacturing jobs are languishing unfilled because they can’t find employees with the right skills to fill them. Even worse, 80% of the manufacturing workforce is between 45 and 65 years old, meaning they are about to start retiring in droves.

How is this good news? There are jobs out there if people can develop the skills to take them – and there will be more coming on once we start the next business cycle. Getting kids to develop these skills, whether in vocational programs or whatever, is going to be a major policy initiative in coming years. But if the free market is going to start working we should see wages rise and a new wave of employment for people who don’t opt to take on the often crippling debt it takes to complete college. The good news here is for the next generation – the one that is going to pay off our tab. They need it.

It’s enough to make Boehner cry. Wait, no it’s not.

The evil this week comes from the reliably wicked US House of Representatives, which has passed a series of bills designed to roll back the weak provisions of Dodd-Frank. They would cancel out the important regulations put in place to stop the abuses of Credit Default Swaps that we have followed from inception to reality.  But no, that’s not all they did. They kept the implicit bailout by the US government in place, and even extended it to foreign owned subsidiaries of US banks – not just allowing socialized risk, but extending it. This is what they do rather than work on, say, an actual budget.

The worst culprit is HR 992, a bill written almost entirely by Citibank lobbyists. This story of pure evil isn’t worthy of a post in itself because none of this will go anywhere in the Senate, so it’s not going to become law. That’s how it passed with bipartisan support – as the NY Times quoted an unnamed Democratic aide, “It’s a free vote.” They can take the lobbyists money, vote for their evil, and know it’s not going anywhere. That’s evil at its worst.

You were expecting a holiday season in Whoville?

The puzzling news this week is that here it is November and no one has the slightest idea how the Holiday Season is going to go. Morgan Stanley weighed in last week to say that this will be the worst holiday season since 2008, with purchases per shopper actually going down – the first prediction this bleak in an array of calls that range from awful to fantastic. The main reason they are so negative is that there was a slowdown even before the Federal shutdown, as shown at least in part by the incredibly weak gain of 130k jobs in the October ADP report. It’s not good.

But if you don’t like that holiday gloom, the Institute for Supply Management announced on Tuesday that their index of service providers rose considerably in October – from 54.5 to 55.5 (above 50 signals expansion). This real-time report comes even with the shutdown, which apparently had little effect on retail after all. So where is retail headed this year? We know even less as time goes on, it seems.

The stupid news arrives from Bitcoin. Barataria is probably the only online economic journal to never mention the new kind of money before. You’ve all read enough about it elsewhere, it’s not news. Except it’s worth noting that Cornell Prof Emin Surer has found a way to distort the “mining” system that has kept the bitcoins a’flowin’. The mining operation is done by thousands of computers simultaneously working on complex cryptographic puzzles, and the bizzy work is rewarded periodically with a few bitcoins. When the puzzle is solved someone shouts “huzzah!” and they all move on the next one. But Surer has found that with a few tweaks the operation that solves the puzzle can keep the info to themselves and thus be the only operation moving on to the next puzzle – and reaping all the rewards.

This “selfish mining” was immediately put down as unreasonable by Vitalik Buterin, technical editor of Bitcoin Magazine. “No honest (or semi-honest) miner would want to join a selfish pool,” he suggested. “Even if they do have a small incentive to [join], they have an even greater incentive to not break the Bitcoin network to preserve the value of their own Bitcoins and mining hardware.” Um, no. This is called “asymmetry of information” or knowing something before someone else. It’s how any one trader gets an “edge” – and how markets move towards monopoly. Perhaps the current bitcoin insiders are all chummy and happy, but what happens when someone like JP Morgan gets in on the racket? You can see where this is going – and will probably go one day soon. Stay tuned.

Those are the stories that aren’t hitting the mainstream news yet but probably will one day soon. Perhaps you have a few more that you’d like to share?