As Minnesota thaws out from a “polar vortex” that froze us colder than the North Pole (and the current location of the rover on Mars), there was some interesting news on jobs from all over the nation. Three stories of thawing and a little heat coming down give us all reason to be a little happy.

Spring is still months away, but let’s bask in the small improvements for a while. It beats huddling inside.

The first big story is that December closed out with a bang, according to the ADP Employment Report. 238k jobs were added, bringing the total for 2013 up close to 2.2M jobs gained. It’s not a lot, but the acceleration at the end was impressive. Large corporations contributed 71k of those jobs, a decent 30% of the total gain. In fact, the net improvement in December came largely because big companies are finally starting to hire in reliably big numbers.

The big gain in corporate profits in 2013 is finally being re-invested in employees. That can only mean that people at the top see room for growth in 2014. The psychological aspect of the “depression” is starting to lift, and hope is replacing fear. Or is it greed over fear? In business they are often the same, as we’ll get into later.

With this final number it’ll soon be time to make some predictions for 2014. With decent growth of around 3% generally agreed on for the economy as a whole there may be a decent turnaround. It’s not a big thaw, but after numbing cold it’s not bad.

That’s not to say that everyone is doing well, as Macy’s announced a post-Christmas layoff of 2,500 people, sending their stock up. Happy New Year, Bob Cratchit. Obviously a decent retail season wasn’t good enough for them and Macy’s doesn’t see a lot of potential for growth in the future. Yes, the economy is still restructuring and there doesn’t seem to be as much potential for big retail department stores – which is actually pretty obvious if you’ve been to one lately. 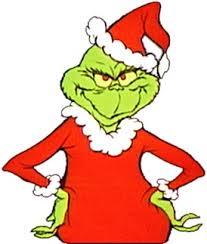 You were expecting a holiday season in Whoville?

Yet away from Macy’s December saw the lowest announcement of planned layoffs since 2000 – the year the Managed Depression started. That is turning the corner on employment, just as we’ve been hoping. But to read the CNN article linked to above you have to see another big turnaround, this one in the media. Wall Street cheering layoffs is not simply news, it’s becoming a matter of deep shame. The populist fervor against big companies doing this is starting to boil over. Will the heat stay up on big companies? That could be another big story for 2014.

But there is one more job that made the news, and this one isn’t employment. It’s more of a con job, or something you can file under “nice work if you can get it.” JP Morgan, always one for good news, has to pony up $2.6B in fines and settlements for its role as the banker to Bernie Madoff. The heat came down on them hard and they will be coughing it up like a bad case of bronchitis.

It was revealed this week that as Madoff’s ponzi scam unwound the frontline workers at Morgan dutiful raised red flags as the accounts showed signs of churning, check kiting, and other irregularities. Morgan’s response? They floated new securities tied to Madoff and sold them to their other customers, effectively shorting the high-flying “investor” as they learned the scheme was going south (unlike Madoff, who strangely never had an escape plan to the Caribbean or another sunny place). When it finally did collapse, Morgan made sure that they were paid first, effectively seizing the accounts before the Feds could.

The problem with JP Morgan, the investment bank, is that they utterly fail to live up to the moral and ethical standards of Captain Morgan, the pirate.

With all the money flowing out of Morgan there are still no signs that anyone is going to go to the cooler over this. Yes, the media is willing to report this story with even more open-mouthed incredulity than the layoff story, so there is some traction. But it’s still just about the fines that have to be paid, not real hard time. Let’s see if the press keeps up the heat now that the genuine disregard for decency has been laid bare. The largest investment bank aided and abetted the largest ponzi scam ever perpetrated right up until the moment it became obvious they could make more betting against it. Think about it.

So what can we say about jobs? There is a decent thaw in the works, and the heat is turning up on companies to start to produce more, or at least not cut more. That, and the heat is coming down on the companies that do nothing but skim and scam off of the system.

It was a good week all around, at least if you don’t work for Macy’s. Here’s hoping those 2,500 people can find work with a company that has a future, and here’s hoping for a decent thaw ahead of Spring.