We live in a time made for satire. Everything is changing so rapidly that the powers that are have trouble holding on, the flood of news is difficult to make sense of, and even our language is often inadequate to explain what’s going on. Everything and everyone seems vaguely hypocritical and irrelevant. That’s why the Daily Show and The Colbert Report are so successful.

Shame then that so much “satire” isn’t really funny – or actually satirical.

You may have unwittingly believed a story shared on basefook or some other social media site that seemed true but wasn’t. Many stories written about Rep. Michele Bachmann (R, MN) for example are based on faked quotes that seem like something she might say – but didn’t. What many aspiring satirists fail to understand is that satire is more than just fake news, it has to reveal an inner truth that, at its best, is slightly painful. Also, satire has to be funny, we can’t forget that. 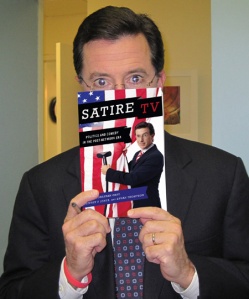 The face of satire today.

What is satire? An excellent and remarkably concise analysis can be found on the site literarydevices.net, which is rather handy all around. I think this is the best practical definition of how to craft a satirical piece I’ve seen yet:

Satire and irony are interlinked. Irony is the difference between what is said or done and what is actually meant. Therefore, writers frequently employ satire to point at the dishonesty and silliness of individuals and society and criticize them by ridiculing them.

Many supposed “satire” websites have sprung up to imitate the heart-stoppingly funny site The Onion. Nearly all are miserable failures by comparison because they failed at the basic concept of verisilimitude – or, as Colbert calls it, “Truthiness“. A good piece of satire is not real, but that doesn’t mean it only has to sound true while being false. It has to have a ring of truth to it that goes beyond simply reporting on events to an inner essence that is more true that blank reporting on “facts” could ever achieve.

Here is an example from the Onion, chosen completely at random.

GENEVA—Drawing leading luminaries from the two fields, an international conference held this week at the University of Geneva brought together hundreds of esteemed theoretical physicists and rhythm-and-blues artists to present their research into the nature of forever.

According to organizers, the assemblage of Nobel laureates and Billboard chart-toppers attended numerous sessions at the four-day symposium, where they grappled with extant questions regarding the concept of forever that remained unresolved, such as whether forever is better conceived as an infinite, four-dimensional expanse of space-time or, rather, what one second feels like when you’re away from your girl. 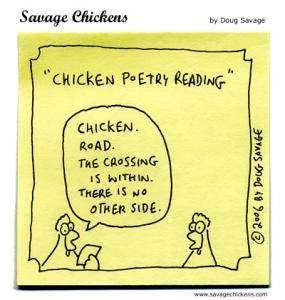 What’s great about this piece? It contrasts two things that shouldn’t be together and yet seem to be the same. That’s what makes it funny. But digs deep at academic conferences and blank reporting utterly missing the point about topics by being bland and precise. This makes fun of the press as much as anything.

Contrast that with one of the sites that consistently fails at satire, The Daily Currant. Their fake news is only fake news without that essential meta-truth that’s more true than truth itself. For example, the article headlined “US Bans the Import of Russian Vodka” reveals nothing about the situation – and it’s really not funny at all. Stuff like this shot into the stream of news everyone is blasted by on a daily basis is just noise. It’s neither enlightening nor entertaining.

I know, this piece isn’t funny, either. Sue me.

My point is that satire is a fine art that is rarely practiced well. Regular Onion readers know that the headline is often the entire joke and the rest of the article is only filler. Good satire has to get in and get out – BOOM! goes the gag, and that’s it. This piece from the Borowitz Report, an uneven satire site, shows that the guy can really nail it when he has to. “There is no excuse for offensive racist comments like the ones Cliven Bundy made when there are so many subtler ways of making the exact same point,” is a really funny statement. It’s more true than the truth.

For the wanabees who fail at satire so badly? How about the headline, “Journalism Majors Turn Bitter Over Lack of Future for Truth”? Or, perhaps,

The ancient muse of Irony was found dead after a baccanal that included cocaine, Red Bull, and what one witness described as “Enough stimulants to jazz to life the bones of Aristotle.” The ancient literary icon apparently suffered a heart attack after running around the room declaring his immortality, which only figures.

OK, so I’m a literalist at heart. But I still know good satire when I see it, and most of what passes off as satire isn’t fake enough to be more than true.

Have your own examples of excellent satire?  Share them with us!