How will America ever get over the racial divide? It’s going to take honesty, bravery, and humor – with an emphasis on the “get over” part more than the “racial” part. It’s going to take a venue where the bizzy blur of daily events has some space where people can breathe, think, listen, and then react – and feel comfortable enough to laugh about it.

Just when the limits of humor were tested with the Charlie Hebdo attack, which left us all to question not just what is right but what is funny, along came The Nightly Show with Larry Wilmore. It proves once again that Comedy Central isn’t really all that funny sometimes, which is the highest complement anyone can give it.

The Nightly Show is 100% Real, and sometimes it just hurts. We need that more than a laugh. 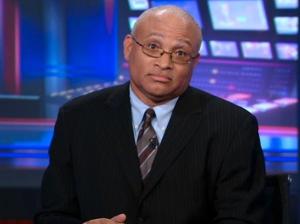 Larry Wilmore’s classic “What did you expect?” look. The real face of Black America, 100%.

The opening for Wilmore came when faux conservative pundit Steven Colbert took the gig to replace David Letterman, giving up his 11:30PM (Eastern) slot. It was hard to imagine how Wilmore would replace Colbert, given the latter’s unquestioned role as the King of Satire. His whole shtick was a joke that lambasted the fake news machine that spews purest BS across our daily news diet.

Wilmore could have taken his show in many directions. He’s not a satirist by nature, despite his sometimes coldly acid observations about the plight of Black America earned over 54 years of livin’ it. He could have done a news comedy show that was only incidentally African American, as he certainly has the chops to comment on just about anything. He’s a smart, quick, and gifted comedian.

Instead, he has given us a show that is undeniably, bravely Black. It opens with his own routine on the news, giving us a dose of his cynical and biting observations. Noting that some movies were robbed when it came time for Oscar nominations, he played a clip of the (not nominated) Lego Movie – and followed it with, “Oh, black people didn’t get nominated for an Oscar? [Yawn] Yeah I’m mad, I guess.”

Wilmore takes on Cosby. “How many women have to accuse him before we accept it?”

What was great about this is that this is exactly the response most Black people have to the many slights that they experience daily, let alone at the Oscars. There’s only so much outrage you can have about the Way Things Are once you get used to it.

Where the show gets into the heart of Black America, however, is with the four guests making up a panel at the end. Wilmore has already taken on Bill Cosby with his panel. “Tonight we are talking about Cosby,” Wilmore said. “We’re answering the question, did he do it? The answer will be yes.”

The panel concludes with Wilmore asking his panelists questions that they have to answer by keepin’ it 100% Real. If they do so, by the audiences applause, they get a card that says, “I was 100%”. If they don’t, they get a tea bag for their weak tea. It’s as Black as the hook at the Apollo in the way it doesn’t put up with crap, and itself completely real. It’s the missing element in discussions about race and it comes in a place that doesn’t have to bother itself with the ubiquitous White Perspective.

Wilmore with Sen Corey Booker (D-NJ) on his panel. He is the first, and probably the last, politician on The Nightly Show.

The panelists are there to represent themselves, not their race. If that doesn’t sound like a huge breakthrough to you, then you’re not paying attention to American media today (good for you!).

Wilmore’s show, overall, really isn’t that funny. It’s just funny enough to belong on Comedy Central, but the real payoff hits too hard to be laugh out loud. I still believe that Comedy Central can do more for race relations, however. I want to see a panel discussion on race with Chapelle, Foxworthy, Key, Peele, Larry the Cable Guy, and Fluffy. They’d bust on each other the way people do in real life and do more to help us all get over ourselves, and our races, than anything else.

In the meantime, we have The Nightly Show with Larry Wilmore. Can America get over the racial divide? First, we have to get over ourselves. A space where Black Americans can talk openly and keep it 100% with all of America, white and black, peering in makes for a fantastic start. It’s a great gift that can only help the whole nation do what has to be done.

Is it funny? You be the judge because you simply have to watch The Nightly Show. Just keep it 100% when you do, OK?

17 thoughts on “The Nightly Show”