Eric Cantor’s primary loss may have been the shock that finally changes everything. That’s an awful lot to ask, but the early signs are that the various forms of establishment in politics and media were caught completely off guard. The response so far has been careful and even intelligent as the constantly wagging tongues have stopped long enough to give more thoughtful voices an opening.

Whether or not there is a permanent change remains to be seen. But the easy explanations quickly sank from their own weight while something that usually lurks much deeper is floating to the surface. If we can change the conversation, we can change the politics.  Crossies? 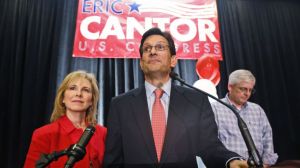 Cantor at his concession.

It’s possible to make too much of the loss. Cantor was facing a partisan primary in which only 12% of the eligible voters bothered to show up, so it may not be representative of anything. But the loss of a Majority Leader, the first ever, is so serious that the conversation in the press simply has to focus on what happened. The first pass at that came right after the loss – it was over immigration reform, a key point his opponent hammered at.

That simply doesn’t make sense in a suburban Virginia district, so something remarkable happened. The press quickly dropped that line and started focusing on the elephant that was in the room along with a lot of people who work in Washington who live in that district. Cantor, and Congress, are hugely unpopular. 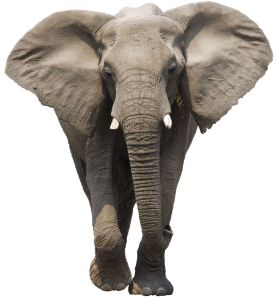 Don’t blame me, I voted Democratic.

But it is more than just being unpopular, and more than just not being able to get anything done. The key to this moment is that Cantor and his party have made Congress largely irrelevant. That message took over the press quickly and has, so far, stayed with us.

Consider this piece in the very conservative National Journal looking for a unity between the far right and the far left. The common enemy? The “elites” who own Congress and have made it ineffective for anything but their needs.

This takes me back to a piece I wrote in 1999 on how politics has become increasingly irrelevant. The gist of it is that the old labels of “liberal” and “conservative” are used despite the fact that their traditional use has no meaning in today’s world. I invite everyone to read it, understanding that it’s a bit dated by now.

The reason that our axis of political thought is broken is simply that politics in a nation of 330 million people cannot be describe in one dimension. When handles like “left” and “right” become useful it’s only for a single issue, a single moment, a single movement. There is a tremendous amount of change happening right now, and the old terms that are fixed in political lexicon are simply meaningless.

When so many people are interconnected, it takes more than one dimension to describe it.

It’s not Cantor or the Republicans that voters find irrelevant. It’s everything.

In a way, the real issue here is that in a social sense a lie is not the opposite of the truth. A lie points the way to the truth by shining language into a dark corner. Language is more than an abstract concept like “truth”, it has a human face. The more someone denies something, the more you know it has to be true.

In this sense, the opposite of truth is more like (cow puckey), or a complete disregard for whether something is true or not. Distraction is also the opposite of truth, such as talking about celebrities when the world is full of suffering. There are many things that never point their way to the truth of our world as well as an outright lie can.

We’ve been wallowing in something opposite truth for a long time because we lack the language to describe what is going on. Left contrasts with right as black contrasts with white – but how would that language describe up? Or red?

What happened on Tuesday was more than Eric Cantor losing for one very good but pathetic reason. When the chattering classes and the power brokers were left speechless the stillness of the moment allowed a few quieter voices to be heard. They have been murmuring for a long time that the shrill noise is meaningless and irrelevant.

Something did change, although it changed slowly over a long time. Forces that relied on the old establishment for job security couldn’t contemplate the gradual change, or when they did they didn’t want anyone to notice. It’s finally as big as the elephant in a very Republican district and can’t be ignored.

If all it took to get us here was to sacrifice Eric Cantor, we should have done it a long time ago. But this is about much more than this. The powers of the establishment have been humbled. The time has come to seize the discussion and make our language work again. That’s the only way we can have a productive discussion about what this nation really needs.

4 thoughts on “Lines and Language”