Much to the dismay of many people of Scottish ancestry around the world, a new nation was not created last Thursday. The people of Scotland, which is to say those who would have to live with the consequences of any action, narrowly decided to stay with the UK. In the lead-up to the election, when it looked like it might go the other way, the leaders of all the parties of the UK promised that Scotland would have more power to decide its own fate and that seemed to be good enough.

But a not-independent Scotland is just one of the many complications found within the UK and in many nations around the world. Simultaneously, an agreement was made in Ukraine to give more autonomy to the Russian speaking regions in an as yet undescribed power sharing arrangement if only everyone would stop shooting. And in Iraq that central government appears powerless as the autonomous Kurdish region uses its own army, the Peshmerga, to battle ISIL with help from many nations.

What, indeed, is a nation? The short answer is: whatever it needs to be. 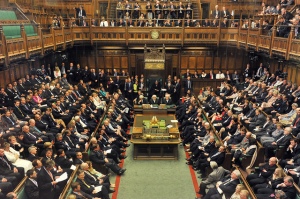 The UK House of Commons. It mostly works.

The political arrangement that makes up the UK is particularly complicated, owing at least in part to the former British Empire. There is plenty of room for local parliaments to manage affairs in Scotland, Wales, and Northern Ireland – but not in England itself. Scotland already has one of the most important trappings of independence – their own World Cup football team.

For all this, a simple, well described Federal system like we have in the USofA, with a written constitution, has so far eluded the UK. That may change in the aftermath of the Scottish vote.

That’s not to say that the arrangement in the UK is the most complex in the world. Belgium famously has far more government per square meter than anyone would ever think is possible, with separate regional governments in Flanders and Wallonia as well as separate councils for the the language and culture of the Flemish, French, and German speakers. It’s confusing at best. 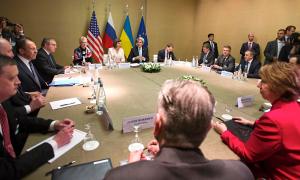 It took a lot of people at the table to get Ukraine and Russia to even talk about setting up an arrangement.

Which brings us to whatever might happen in Ukraine in order to settle the ongoing dispute without so much destruction. What might they do? If the EU is to be a guide, they could go to anything like the Federal system that Germany uses, very similar to the US, to something hideously complicated like the Belgian variety focused equally on culture as territory. You can set up any system you like within a nation and there is no one to tell you that you can’t do it.

This is all to say nothing about what a “European Union” is, and whether or not Ukraine might join it soon.

Does it get much worse? Also in the news lately has been Israel, which technically “occupies” the West Bank and Gaza even while it gives them local rule over …. well, just enough local rule that they can’t possible succeed at anything. It’s a system frighteningly similar to the Apartheid arrangement of “homelands” that South Africa eventually had to give up on.

If you go as far as setting up a system that clearly dooms a population to failure, you can bet the rest of the world will at least complain. But there is still no one to force them to stop it.

Signing the Peace of Westphalia

What, then, is a nation? It is a “sovereign” entity that gets to do pretty much whatever it wants to. It’s been that way ever since the Treaty of Westphalia ended the 30 Years’ War in 1648. That laid out the idea of a “nation state” that has been used ever since – and more or less forced on the world outside of Europe by the colonial and military might of the Western World. The borders are drawn, no matter how haphazardly, and inside of them pretty much anything goes.

So what can the UK do with Scotland? Or Ukraine with the Russian areas? It’s entirely up to them. You name it, they can do it. There is no one that can stop either nation from coming up with a terribly complicated arrangement that might hardly make sense to anyone, should they choose to.

Meanwhile, in Iraq, there is something like a nation we might call “Kurdistan” more or less forming given that they have taken over nearly every function of what we might call a government. The only thing they lack? Recognition as a formal “nation” that would allow them to do whatever they want.

And the concept of a nation? For some odd reason, it’s all that really matters. Nevermind that it can be just about anything anyone wants it to be.