There are basically two types of Democratic-Republics in the world – Parliamentary, or a Prime Minister led government, and a strong President based system.  Hybrids of various kinds involving monarchs and other systems with varying degrees of power abound, but every democratically elected government in the world falls into one of these categories.  The person who shows up at the international conferences has one of these titles.

But is that the only way to go?  The situation in Egypt, among other places, has led me to wonder if there is some way a nation with a history and tradition of strong leadership might do better under a system of more than one nationally elected leader with defined roles and a real balance of power between them.  I call it an “Elected Cabinet”, and the inspiration comes from the laboratories of democracy, the US States.

The UK House of Commons. It mostly works.

Every Democratic-Republic starts with a legislature, congress, or commons of some kind.  This is a body elected by the people, almost invariably by district.  The members are one of many and represent a defined set of people.  So far so good.

But a legislature alone cannot run a nation – there has to be leadership.  And most Democratic-Republics have found it necessary to somehow temper the will of the people in a way that takes care of tradition, the rights of minorities, or simply a ruling class by having an “upper house” with the same or less power.  The US Senate, elected by state, is designed to be more august and thoughtful by nature.

Beyond that, someone is elected to be in charge of the nation and make quicker decisions in an executive function.  If the parliament elects a Prime Minister you have one form, if the people elect a strong President you have another.  Israel has a largely powerless President and a directly elected Prime Minister, so titles can vary.  Either way, they array around them a cabinet they chose to either form a coalition or execute their will in the day to day operation of the state.

But what if only some or most of the power was in the chief executive and most of the cabinet was elected?  For example, 46 US states elect an Attorney General that is separate from the governor.  Most elect a Treasurer independently, to keep the money handling distinct.  There is usually an elected Secretary of State for independent elections.  Many states have elected Insurance Commissioners, Agriculture Commissioners, and so on.  Minnesota has the unique position of Auditor, whose job is to keep an eye on the operation of (mostly local) government.

The US Senate. Imagine if they had something they had to do.

If most of the cabinet was elected separately with distinct roles, and formed into an upper house (a Senate, perhaps) you could distribute power among many executives and create a balance while retaining strong roles.

What would such a body look like?  An elected Attorney General is obvious, as is Treasurer, Secretary of State, Auditor, and so on.  But why not an elected Education Senator or a Health Senator?  How about a Labor Senator and a Commerce Senator who have to work together?  Some of the power of the President can be shared into a body that has to give a majority assent to legislation and perhaps approve the appointees to a Presidential Cabinet.

What should stay with the President?  Control of the military and the Foreign Ministry for starters, along with judicial appointments and the Civil Service’s general operation.  It would still be a powerful position, and the degree of power that leader retains can be tweaked based on national need or preference.

An elected cabinet as an upper house should probably not initiate legislation or spending authorization – so there goes the tricky Conference Committees that often make backroom deals in the US.  But they might have some unique powers over the lower house such as the ability to yank a bill onto the floor and force a vote, reducing the power of an entrenched old guard to bottle up important legislation. 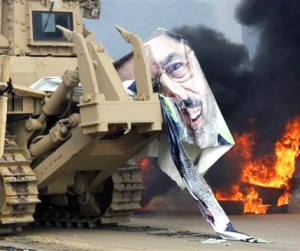 A strong leader or chaos? No, don’t just pick one.

But the real payoff comes in the balance of power when times are bad.  If the Attorney General or similar function controlled the police and the Secretary of State controlled a strong citizen militia, armed crackdowns and coups would be difficult.  You could still have a strong state mechanism, but if it is shared among different parties it would be hard to be too brutal.  It would be up to the people to elect different parties to make that happen, of course, but as a nation grows into its democratic traditions you can bet they would.

Such a system might be just what a place like Egypt needs to balance things out and escape from a tradition of autocracy.  Naturally, putting the military under civilian rule, obviously the President, would be a tricky first step.  But there has to be something between an often chaotic Parliamentary system and a strong President that would suit an emerging nation.

Can you think of any current examples?  I can’t.  So here is my proposal.