Did you hit the stores for “doorbuster” deals and a mad rush for great deals? If you did, you’re one of a smaller group every year as Black Friday and its even darker sibling on Thursday become a feature of Thanksgiving past.

The final data is not in, especially with “Cyber Monday” still in front of us. But this weekend was particularly weak and, if the past is any indication, a sign of a bleak holiday shopping season. But no one thinks this will hold as shopping patterns are changing. The forecast remains for a robust gain of 4.1% year over year.

The death of the Black Friday frenzy is a big story of the year if this pulls out. 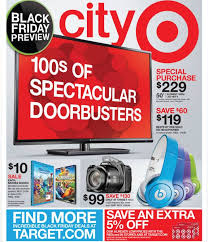 Target’s Black Friday ad from the paper. An omnivorous dinosaur run in a tree-eating dinosaur.

The National Retail Federation (NRF) has already performed its survey of the weekend. They found that total traffic out at physical brick-and-mortar stores was down about 5.2% over 2013, with about 66M people or 55% of all those who plan to spend money this season out. That comes from a survey of 4600 shoppers who were willing to stop for a moment to answer the surveys.

ShopperTrak, which surveys retail outlets, reported a big increase in Thanksgiving Day sales (up 55%) and a small drop on Black Friday (-7%) over 2013. They see the entire weekend running about $12.3B, about the same as last year at retail stores.

Fewer shoppers running up the same tab is actually a good sign. People may be spending more time with their families and shopping online rather than going out. They may also be waiting for more discounts later in the season, as happened last year.

For this reason, the estimates are going to hold for now. A flat Black Friday shopping season doesn’t mean a thing to the long haul. The word from the NRF is that Black Friday and the rush for deals is a thing of the past:

It’s a long way down that aisle …

“A strengthening economy that changes consumers’ reliance on deep discounts, a highly competitive environment, early promotions and the ability to shop 24/7 online all contributed to the shift witnessed this weekend,” said NRF President and CEO Matthew Shay. “We are excited to be witnessing an evolutionary change in holiday shopping by both consumers and retailers, and expect this trend to continue in the years ahead.”

Why should we expect that this flat weekend shapes up as expected as a decent gain in overall spending? “We need to be cautious about looking at a single day or two in projecting the season’s total,” according to Bill Martin, founder of ShopperTrak. “In 2013, the Black Friday weekend produced a 1% gain, underperforming the 3.1% gain for the entire season. There is a significant amount energy left in the consumer with 7 of the top 10 sales days of the year yet to come, including Super Saturday which is projected to be the number one spending day of the year.”

“Super Saturday” is the Saturday before Christmas, this year on the 20th. If it does pass “Black Friday” for the first time ever, it will prove that the mad rush that threatens to devour Thanksgiving like so much turkey and gravy may finally be beaten back.

No matter what, shopping is evolving. The expectation is for much higher growth in online retail overall, meaning there must be a decline in brick-and-mortar retail. This alone will tend to spread out the shopping season, as people can go online whenever it is convenient for them.

The success of this season can’t be told in just one weekend, at least according to the professionals that track it. They’re telling us to not worry and let the reports of a weak season go as a ghost of Christmases past. That’s all just as well.

We will see by the 20th if this season is what has been predicted – and probably not a day before.