It became official on Sunday. The 2016 Presidential election cycle is fully underway now that there are candidates in both parties. We have 19 months of this to look forward to, so if you are underwhelmed now it might be best to find a cave to live in. As the sometimes hilarious satire site “The Borowitz Report” put it, “The two major political parties’ unconscionable waste of money officially commences this weekend, as Democrats and Republicans will soon begin spending an estimated five billion dollars of their corporate puppet masters’ assets in an unquenchable pursuit of power.”

Why care? If not for the spectacle, you might want to care for the simple reason that whoever becomes the next President may become an American icon through the blessing of really good timing as this depression winds down into a potential new golden era. It’s all about managing inevitability for Clinton, something that she appears to be doing a much better job of all around. 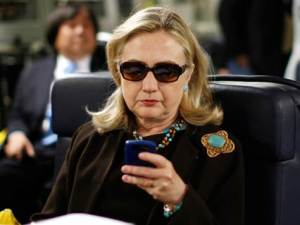 The image that launched “Texts from Hillary”. She’s at her best looking bad-assed.

One thing needs to be out of the way immediately. Though it may be popular to refer to Sec. Clinton as “Hillary”, Barataria refuses to do this. Women in politics are often called by their first names, including “Liz” for Sen Warren (D-MA). Men almost never are. While this is a part of the branding for women as a more friendly and open kind of politician it still seems horribly sexist. It’s Sec. Clinton to us, tankyooberrymooch.

But this underlies the fundamental problem that women in politics have, which is the complete lack of archetypes. Men can use a shorthand for the kind of leader that they want to be in ways that are not always open to women. For example, what woman would want to be called “Kennedyesque”? It means something completely different with the change in gender.

Clinton’s big advantage here? We know her. Boy, do we know her. 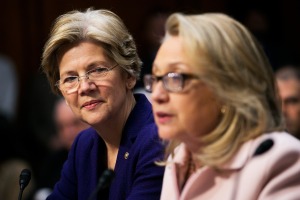 Warren, like Clinton, wants to win – for what she believes in.

Her net favorability seems to depend a lot on who asks the question, with the Pew Research Center putting it at 58% and a sum of a lot of other polls as low as 45%. In any case, everyone knows who Clinton is.

No matter which favorability number you believe, this is a huge advantage as Clinton does not have to introduce herself to the voters. That means that the opposition can’t do a “Swift Boat” routine and introduce her in a negative light first. Since it won’t work the same way, can we count on a much less negative campaign?

I knew you’d like a good joke. 19 months of overblown drama will need a lot of this kind of comic relief. 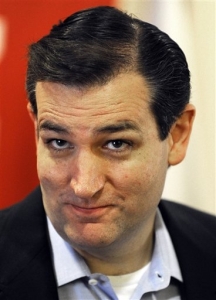 Yes, this is the worst picture of Ted Cruz I could find. Sue me.

As it stands today, Clinton leads any potential Republican challenger, but not by enough for anyone to be comfortable. And there is still a chance for a primary challenge, although that is doubtful. The Democratic leadership, including potential renegade Warren, is not going to screw around this time. Goal number one remains standing solid and strong while the Republicans eat each other up.

Such a strategy can only work when your candidate is a known commodity like Clinton, so this is a time made especially for her. It all comes down to managing inevitability, which is to say keeping her supporters engaged enough to show up in the kind of turnout that has blown Republican minds since 2008.

Since the most reliable voters are older, a “base” turnout of only those who reliably vote every time tends to be very conservative. The secret to the Republican rout in 2012 was an insanely low turnout, a post-WWII low. Big turnout inherently favors Democrats as younger people who may not normally show up tend to be much more liberal. That’s why a nasty election full of smears is a Republican weapon of choice – a voter declaring “They are all dirty!” is a no-show and essentially a Republican vote on the margins.

Managing inevitability thus comes down to a positive message, something akin to “Hope”. A focus on the future and perhaps even that mythical golden age that Barataria rants on about has to be a part of the package. But it will have to be about more than hope to make it work this time. “Everyday Americans need a champion. And I want to be that champion,” is her catch-phrase from the announcement. Expect that to be refined into something closer to Hope without sounding stale.

Why should we look forward to the 2016 election so far out? The craft will be in the orchestration and the message. Nothing is set, and “inevitability” be damned.