The election is coming up, and boy is it getting crazy. Not the US election – there’s still a year and a half of nonsense to endure before that. I’m talking about the UK House of Commons election on 7 May. It will certainly test the limits of their parliamentary system, probably moving it into a more funkadelic system in the process.

I had to, I love that joke. Somebody’s gotta bring da funk.

The problem is the UK is more divided along fundamental lines than it has been in a very long time. Given the large number of parties that are likely to achieve seats (12) the election will almost certainly solve nothing, only marking the start of tortured negotiations that will last for three weeks. They’d like to have a government by the annual Queen’s Speech on 27 May, so there is a deadline, but it will be hard to meet.

It’s worth watching in the US if for no other reason than the turmoil they are experiencing is similar to ours, expressed very differently in a different system.

How many days do you have left as Prime Minister, Mister Cameron?

Going into this election the 650 seats in Commons were commanded by a coalition of the Conservative Party with 302 seats and the Liberal Democrats with 56. The tenure of David Cameron, Conservative Party Leader, as Prime Minister has been a lukewarm affair at best in part because of the difficult coalition he has commanded. The two parties are naturally at odds with each other, the Liberal Democrats being a kind of centrist mushy affair.

Standing against them this time is a Labour party with renewed popularity and focus. Britons are tired of coasting along and are seeking solid direction. The only problem is that Labour is, well … the Labour party. Ever since Tony Blair re-invented it as a more center-left party it’s been drifting along and terribly afraid of standing strong for anything.

If you’re a Democrat, especially if you have mixed feelings about anyone named “Clinton”, you’ll understand the problem immediately. 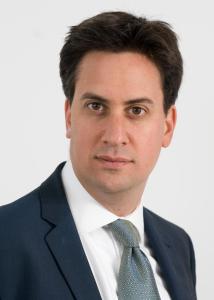 “Boyish Charm” only goes so far when electing a Prime Minister. Miliband has it in excess.

It’s best illustrated by their party leader, Ed Miliband. He is young, good looking, says all the right things to get elected, and yet comes off as utterly uninspiring. His desperation can be found in his unveiling of an 8 foot tall slab of stone with the six Labour platform statements on them. His vows are now “carved in stone” for all to see – and they are weak platitudes at best. What, indeed, does Labour stand for? Responsible good government, of course. It’s a great yawn.

Meanwhile, the natural Labour constituencies in Scotland are polling heavily for the Scottish National Party (SNP)- even after rejecting that party’s main goal of independence last September. The reason is a simple one – SNP Leader Nicola Sturgeon is an articulate, dynamic leader who isn’t afraid of specifics and a clear new direction for her nation. Whatever her nation is, of course.

How will this shake out? The Guardian predicts that Labour will manage to win the most seats, but not by much. Five Thirty Eight predicts that the Conservatives will hold on to be the largest party, again not by much. But from there it gets very interesting. 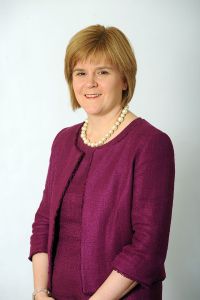 Nicola Sturgeon, First Minister of Scotland, and the only real antidote to mushy politics in the UK.

The Liberal Democrats are unlikely to win enough seats to be a viable coalition partner for the Conservatives no matter what, and party members are likely to demand a lot more from a coalition this time anyway. If the Conservatives are the largest party, and are thus invited by the Queen to form a government, it’s going to be tough for them to do it.

If Labour has the highest number, things get even stranger. The most likely coalition partner is the SNP, but as a party in standing for dissolution of the UK as we know it that’s a bit tricky at best. Miliband has promised that there will be no SNP ministers in a Labour government, which is an interesting way of not saying they won’t make promises to the SNP for their support. What exactly that means is anyone’s guess.

What about all the other parties? None are likely to have much to contribute. Some of them are even more abhorrent than the SNP as a coalition partner, especially the UK version of the Tea Party, the UK Independence Party. They may win a few seats, but no one wants to acknowledge they exist.

How will the UK form a government after this election? No one has any idea. But it will be interesting – and a great warning for the US.