Life has become bizzy.  With summer budding green on every tree it’s time to reflect for a moment even when life makes that difficult.  Especially because life makes it difficult.  This piece is from nine years ago – back when Barataria was more like a normal blog of personal reflection.  Father Clay is now 90 years old and still going very strong.  West Seventh is still West Seventh.  Small miracles abound everywhere.

I had the pleasure of attending a banquet for the West Seventh Community Center honoring a man who is part of the glue that holds our community together, Father John Clay.

Father Clay is 81, but doesn’t look any different than he did 20 years ago. “I looked old then,” he will tell you. More importantly, his energy and commitment to community is as strong as it ever was. ‘Respect and understand and learn from those who are different from you’ was the theme of the secular homily he gave upon accepting his accolades. He went on to tell us that our belief in God does not instruct us by itself, but compassion is needed to direct our belief into a purposeful and good life.

The floor was then open for anyone present to speak about Father Clay, and the stories veered from the sacred to the profane. He apparently has always been the kind of priest that is full of life, helping out many people with acts ranging from feeding and clothing to simply being there when he was needed. And then we got to a woman who was once a newly hired assistant.

The phone rang, and a woman said that she was going to a wedding at 4:30 and didn’t have time for confession and there would be communion and did it count? Well, that’s a lot for a new assistant to handle, what with the balance of Heaven and Hell possibly at stake. So she called up Father Clay to ask what information to relay. Father Clay said only two words to her – “Everything counts.” And that was that. The message was relayed and communion was had. 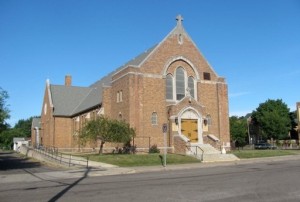 What dawned on this young assistant later is that Father Clay meant it much more generally than an afternoon wedding. Everything counts. That is the nature of community. We are all sinners, yes, but we do not get a ‘do-over’. Yet we can love each other and care for each other all the same.

Without a community, none of this is possible. If we all stand alone, everything we do is in the shadows. If no one sees what we do, does it count? It may not, or so it may seem. Father Clay’s broader community of everyone up and down West Seventh is nothing less than a call for accountability matched with grace. We do not stand alone, and everything counts.

It was a wonderful evening where I got to see some old friends and people I’ve worked with over the last twenty years on one issue or another. I enjoyed the chance to see them and exchange a few hugs. It was so much warmer just thinking that yes, everything does count.

10 thoughts on “Everything Counts”