Rejection of the “mainstream” is an important part of the polarization and radicalization of America. Socially and politically, movements on the left, right, and whatever else there is measure their stands by how far outside the establishment they are.

For all the bluster, it’s mostly nonsense. Trump supporters often rely on Obamacare, as they are learning, if not social security and other programs. Left wingers usually have jobs like anyone else. Everyone has sold out in nearly every way possible – except one. Religion and spirituality is the one place where the true mainstream is indeed slipping away, caught in an “uncanny valley” where the teachings seem too simple, too childlike, to be relevant.

And this is the one place where America is truly failing.

Sometimes the coming of dawn requires a bit of faith.

If you ask most Americans about Christianity, you’ll probably get a similar answer. For far too long, a harsh authoritarian view of the faith has prevailed. God is vengeful and ready to strike at any moment if we get too far out of line. Opinions about the Christian faith fall around either an acceptance or rejection of this harsh view of a Deity who sits in judgment of us all constantly. Either you live under it or separate from it. There is no middle ground.

This is strange because the “mainstream” faiths of Christianity – Catholic, Lutheran, Episcopal, and Presbyterian – are pretty much united in a different view of the teachings of Jesus. The message is invariably that God is love and rather limitless in his ability to forgive and redeem. It’s stressed differently in each faith, of course, but in the case of Lutheranism in particular the basis of the entire faith is Grace – a universal love which is always there for anyone who needs shelter under it.

How did the harsher view of this faith come to dominate?

Moses Viewing the Promised Land, from the Holton Bible (circa 1890)

It’s far from clear, but radicalization of Christianity as a broader social value does seem to be unique to America. Presbyterians became Baptists early on in our history, believing that God still physically manifest his blessing here on earth. It may be a reflection of a wealthy continent where anyone with enough drive is bound to do well. It also seems to be a reaction to a pluralistic society where each group needs to define itself as clearly as possible to separate and divide in order to avoid succumbing to the formless greater world.

With time, a sense of spirituality apart from the exclusive grasp of Christianity has taken hold. This can only be a good thing in my view, but naturally it has only hardened those who see otherwise. If anything, the “Christians” we see making a lot of fuss in popular media have only gotten more harsh, more insistent, and frankly more mean.

Mainstream churches continue to preach a gospel of love and acceptance, and they are taking a beating for it. Their voices are rarely heard above the noise. Far too many people who would find this message the one which resonates through their hearts are instead turned away by homophobia, islamophobia, and general fear of what appears to be everything.

Except materialism. The most ancient threat to spirituality seems to have been accepted. Mammon made peace with God long ago in the most vocal form of the faith. 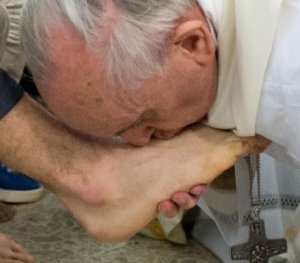 Pope Francis gets this.

Pope Francis stands apart as the only real superstar embraced by the media with a different message. He is routinely demonized for it, a process which is pathetic and frustrating. But his message is far from new or radical in any way – it is simply more clearly articulated by a man moved to fill the spiritual needs of a planet hopelessly lost in its own anger and confusion.

That’s not to say that many people will turn away from all views of Christianity. The problem lies with the anger expressed at the faith, or any sense of spirituality, among those who reasonably reject hatred. Beyond even mainstream Christianity there is plenty of room for Sikhism, Buddhism, Daoism, and Islam as alternatives. A world without any sense of faith is a world which is lost.

It has to start with our own desire to find happiness one way or another. Beyond that, we all have to connect with a greater world every day. Jesus provided a good example as he taught us all that we are each children of God. Buddha taught a way beyond suffering and towards enlightenment, or being one with the Universe. Islam has a careful routine laid out all day long which can keep anyone on the path. Judaism teaches the importance of being a righteous person simply because it makes for a better life.

There is a way for everyone. For the vast majority of traditions one thing is clear – be decent to each other and treat everyone with respect. That’s a good place to start for everyone. You don’t have to believe in a bearded figure presiding over the heavens to understand the importance of this.

What is important is that this crisis of genuine faith has to be resolved in America before we can move forward. The mainstream faiths are actually rather good at teaching us what will help us all the most, and there is nearly universal agreement on at least a few things. Let’s start with that. Let’s all be decent to each other and honest with ourselves.

Seeking happiness for ourselves is a good thing. Understanding that happiness around the world only comes from being as kind and decent as possible only increases our own happiness. The alternative is purely noise and nonsense. Religion rarely teaches hate and fear, no matter how popular it seems to be to either embrace it or angrily reject religion for that perspective. Being without religion doesn’t require anyone to be fearful or angry, either.

America is having a social and moral crisis. If I were to say that it starts with a rejection of faith, many people might agree with me for the wrong reasons. But it has started with a rejection of the most important traditions of faith, a process far too deeply ingrained in our culture at this point to easily counter.

23 thoughts on “A Crisis of Faith”