There’s no doubt that we live in a crazy world where just about anything can happen. If only that could be put to a good use.

Perhaps the most festering sore in this feverish world is North Korea. The population is isolated and starving, living in constant fear. That alone is reason enough to do something, but the recent increase in belligerence and danger posed by nuclear weapons makes it imperative that something be done. The Trump administration does have a point.

We can’t do much about it, however, as that would not go well. But China can. In fact, it’s as much in China’s interest that this problem be solved as anyone. So why not at least propose a deal to make it happen?

Rather than eating chocolate cake and casually mention lobbing cruise missiles at Syria, the president could have done something more dramatic during his meeting with Xi Jinping. It would involve putting an end to the terror of North Korea once and for all with a multi-step procedure involving mutual trust and cooperation.

The plan is to:

The Chinese Army is the largest in the world.

If this sounds crazy, it is. But China has long wanted to solve the North Korea problem for its own reasons, and has expressed this in diplomatic cables as leaked by wikileaks. The reasons are many. If nothing else, the cost of patrolling the border to keep out refugees is very high and creates its own problems for China. China has also developed a long-term strategic partnership with South Korea, arguably now the center for computer technology for the entire planet.

It is also not lost on China that nuclear weapons on its own border are a serious threat, especially in the hands of a petulant adolescent.

Justifying this action may sound difficult, but it is not. The UN Charter allows for invasion only if there is an “imminent threat” of military action. This standard has certainly been met by a nation that refuses international protocol and monitoring of their nuclear capabilities, combined with the development of missiles in open violation of UN resolutions. China, as a Security Council member, could have vetoed any one of them – but did not. 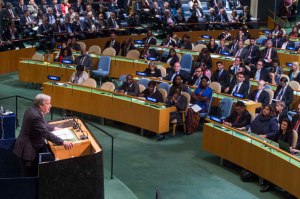 Not getting things done? Let’s use that as a benefit.

If nothing else, action taken by two Security Council members, especially two that are often at odds, will find a way to be justified no matter what.

The biggest problems with such a deal are the other long-simmering disputes between the US and China, namely the status of Taiwan and rights to the South China Sea. Leaders would have to agree to ignore those for the moment. This may well suit the generally practical Chinese leadership as well as provide a model for the rest of the world – “grand bargains” to solve everything at once are tickets to inaction and instabiliy.

This would rightly scare the smaller dictators like Bashar al-Assad who have been able to play powers off of each other. This action would show that the era of games is over.

Is all of this crazy? Of course it is. But remember that by saying so, the definition of crazy now includes a practical solution that would end the perpetual suffering of 25 million people over a period of nearly 70 years. That’s the kind of crazy the world needs a lot more of.

6 thoughts on “Crazy Gets Real?”