Jo Cox, MP, was killed today in Birstall, West Yorkshire. She was leaving a “surgery”, the British term for what we in the US call a “town hall”. The attacker was reported to have shouted, “Put Britain first!” a reference to the referendum in one week on whether the UK should leave the European Union (EU).

If you were thinking the whole world has gone mad, you are right.

While we in the US are shaken by a horrific attack on ordinary citizens, the UK now has to contemplate political violence – something it has not seen since the end of the IRA’s campaign in 1990. There is no comparison between terror inflicted on the public and on the political system, as each is horrible in its own way. But we can reasonable expect there will be more of each until something dramatic happens. 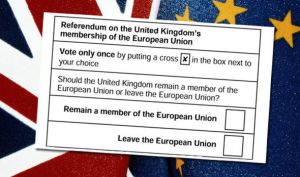 The ballot for 23 June. A simple question loaded with complex considerations and emotions.

The issue which stirred the gunman, who had a history of mental health issues, is the referendum on the Britain’s possible EU exit on 23 June, aka “Brexit”. Polls have been narrowly favoring leaving the EU lately with a large undecided faction. Betting money has always been on the side of the UK staying, but that is also starting to shift. The Bloomberg rating now stands at a 42% chance of Brexit.

It’s been easy to paint the anti-EU faction as a bunch of yabbos, something like rednecks with attitude. There is a lot more to it than that as the EU falters under its own weight. The Spectator is a Tory publication, famously “euroskeptic” and unabashedly pro British. They opposed entry into the “Common Market” in 1975 and repeated their stand today:

On the week of the 1975 referendum, The Spectator’s cover line was: ‘Out – and into the world.’ We repeat that line today.

Since 1975 the EU has mutated in exactly the way we then feared and now resembles nothing so much as the Habsburg Empire in its dying days. A bloated bureaucracy that has outgrown all usefulness. A parliament that represents many nations, but with no democratic legitimacy. Countries on its periphery pitched into poverty, or agitating for secession. The EU’s hunger for power has been matched only by its incompetence. The European Union is making the people of our continent poorer, and less free. 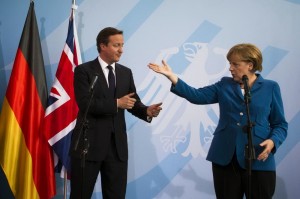 “Are you really ready to leave, David?” Prime Minister Cameron and Chancellor Merkel.

Next week’s referendum was called by Parliament at the urging of PM David Cameron, who has been facing a revolt over EU membership in his own Conservative Party – and the breakaway of some into the UK Independence Party (UKIP). The situation mirrors what has been happening to conservatism in the US – except the target is more specific and easier to rally around. The results are now more devastating.

Today, the process includes the death of an MP. Not just any MP, as Jo Cox was previously head of OxFam and was well liked by everyone. Her role as a Labour MP in favor of staying in the EU and working out the problems certainly cost her life. 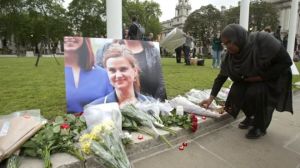 An impromptu tribute to Jo Cox in Parliament Square in London.

This is something no one ever desired, nor was it anticipated. This isn’t something that people normally fear for their lives over. There has been additional security in recent weeks but few took the random threats all that seriously. Membership in the EU is not something that should reasonably result in murder.

What has inflamed passion so much recently? The Syrian refugee crisis has certainly played a role, but the treatment of Greece started a wave of Euroskepticism across the continent. The inability to actually solve the crisis, once and for all, certainly landed us where we are today as much as the heavy hand of Germany in the process which has unfolded.

Britons were skeptical of the continent before all of this. The prospect of being slaves to Germany has an historic ring which fuels a deeper passion.

With the death of Jo Cox, where does this leave the UK and EU? No one can say. The spillover of anger at bureaucrats with the general feeling that no one is looking out for common people, their civil rights as well as their hopes and dreams, is reaching a boil. If it can come to this in the UK, what do we in the US have to look forward to?

Without any question, the referendum next week is not going to be the final word. The developed world has been suffering a terrible leadership vacuum as no one genuinely knows what can or should be done next. A wave of populist anger in response is still reaching a crescendo everywhere.

There is reason to believe things will get much worse, and soon.