The economic news out of most of the world points to a continued, if not new, slowdown. Japan is going nowhere, Europe may be shrinking, China is bleeding capital, and the rest of the world is hanging on. The only place there is good news is here in the US where … there was a net slowdown in the number of jobs gained in May. None of this looks good.

For everyone outside the US, it doesn’t. But most of that money from China is coming to the US – or, more accurately, coming back. Why aren’t things looking up?

Global instability doesn’t help anyone, which is why the Fed stopped raising rates. We can’t go it alone anymore, not in this inter-connected world. It spooks everyone to see this much risk. Yet there is still reason to believe that the US, alone, will see a period of higher growth by the end of the year. It’s all about that money coming back – and when it gets put to use.

The slowdown in job growth over the last two months is probably going to be a feature for a short time to come. As we have noted before, job growth has come almost exclusively from smaller companies. It appears that venture capital is indeed drying up, down 30% or more by the few surveys which attempt to quantify how much is out there. It’s now at the lowest level since 2011, and job growth is dropping.

This doesn’t mean that money isn’t coming in to the US, however. Capital is still fleeing China at a rate in excess of $500B per year – and most of that will come here. The yield on the 10yr T-Bill has dropped to 1.6%, give or take, as investors snap them up in a search for a “safe harbor” to store this money.

It’s not getting out into the hands of those who can do good things with it, like create jobs, however. Risk aversion still reigns.

Investing in large companies can always be hedged. Stock purchased can be offset with options to sell, aka “puts”, so that damage is limited. The drop in the stock market early in 2016 has rallied back to about where it was at the start of the year largely because new money has rotated in. Big companies, represented by the S&P500, are something like a safe harbor – or at at least a minimal amount of risk.  It’s going just as we predicted it would through June.

But that’s not what we need. We need investors who are willing to take good old fashioned risk and invest in a new start-up. We need to create jobs and opportunities. We need to push the envelope and break out of the box with new paradigms which …

Whew! Almost bought my own BS there for a moment! 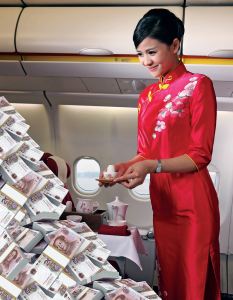 Seriously, there is money coming into the US at a furious clip. It’s just not doing us any good because there is so much money flowing around the world in frightening and unpredictable ways that it scares the bejaysus out of everyone. There are no good measures of the US Dollar “carry trade”, or borrowing in US Dollars for overseas investment. There are only spotty measures of venture capital. These things aren’t supposed to be this important – and no one has kept a close eye on them before.

Which brings us to the new economy. Money is coming to the US in search of safety, but we are having trouble using it. The process by itself scares people because there is risk everywhere. We can’t really say how much is coming in with great confidence, nor can we say how much is going into small business development. All we know is that long term Treasuries are a hot prospect right now.

How will this all settle out? Sooner or later, some of that money will take a risk. Some of that money will be rewarded for its risk and new companies with new technologies will come from it. That will be the day that we learn how to measure what’s going on and there will be confidence in the form of a line that is moving ever upward towards a brighter future.

Until that time, welcome to the new economy. It’s something we don’t even know how to measure yet, but what we do know looks very scary. That fear doesn’t lend itself to anything but carefully hedged investment in things that aren’t really all that useful.

No one said re-inventing a new economy would be easy.