Home » Nooze » Education at the Speed of Profit

ITT Technical Institute was hardly a fly-by-night operation. After 50 years in business as a for-profit technical school it was forced to close down after losing its accreditation and, shortly afterwards, eligibility for federal student loans. It’s merely the latest blow to the for-profit education market after the closing of Corinthian Colleges in 2015 and the dramatic paring back of the previously aggressive University of Phoenix.

Is there a future in for-profit education? Does the free market work, or should education be entirely run by and for the public? 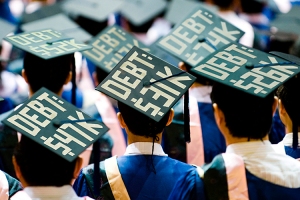 Earning a BS in Debt.

First, a disclosure. I have a degree in Chemical Engineering from a private, for-profit school – Carnegie-Mellon, and I have worked under contract with online-only for-profit Capella University.

For-profit schools are under a lot of scrutiny for many good reasons. Most students finance their education, from any school, through as many grants and loans from the federal government as they can. Total student loan debt now tops $1.3 trillion, and is carried by 43 million Americans.

A lot of money has been cast around for education. While it is usually a good investment, you have to expect that it’s also a way of chumming the water for a lot of sharks.

Online Education is necessary for many students.

That has been alleged on a broader scale in the ongoing threat to the Accrediting Council for Independent Colleges which is responsible for policing many of these schools. They are authorized by the Department of Education to give the thumbs-up on colleges of all kinds, but now face being shut down after a vote by an advisory panel. The Department of Education has until later this month to make its final decision.

Are for-profit schools, especially online-only ones, just a large scam to defraud taxpayers?

The short answer is that no, there are many good schools offering programs that meet the needs of their students very well. It’s a matter of verifying that this is indeed happening in real time with appropriate regulation. The system is based on an antiquated model of accreditation review every four years with various checks and balances. There are very few provisions for shutting down a school quickly and stopping the bleeding once problems are detected.

Until now, that is. The federal government is using its control of student loan money as a sledgehammer.

Most online education is run by traditional public universities. Graph from US News & World Report.

This is one way to regulate the industry, but it’s not likely the best way. As a group, there are indeed many online options for education, most of which are run by more traditional public schools. They don’t necessarily respond quickly to changes in the needs of students. In a rapidly changing economy with new skills being developed every day a rapid turnaround is a great edge for anyone looking to stay current in their chosen career.

Education simply doesn’t typically move as fat as business – hence the idea of running education as a business.

If the only way it can be regulated is over the long term or with a sledgehammer of yanking public funding, however, the for-profit education industry, online and offline, has a problem. Students have to believe that the investment they are contemplating is worth the time and debt that it’s going to take to get a degree. One of the major complaints against ITT was that they inflated their statistics for employment after graduation – a stat most adult part-time students consider critical.

This is almost certainly a situation where more regulation, of the right kind, can only be good for the industry. Consumer confidence has to be high in order for the whole system to work. That’s true for any form of higher education, but especially true in the for-profit case. The value of the brand is made in part by the value of the whole experience across many brands.

As it stands, the ability to regulate for-profit schools has been demonstrated by the Department of Education – in a way that calls the entire industry into question. This helps to protect the public investment of grants, but it does not generate any confidence in the system. It calls into question whether or not any for-profit school should be eligible for federal grants or loans.

That’s a terrible shame because there is a place for education to change much more quickly in response to a changing job market. That’s not to say that anyone is really doing a good job of this now, but the principle is a good one. Appropriate regulation which can guarantee the education experience right now has to be developed for this industry to be able to bridge the terrible gap between immediate needs and long-term investment.

This may be impossible, of course. The goal of a workforce that is both skilled and flexible is a good one, however, and the process is certainly worth more consideration.

11 thoughts on “Education at the Speed of Profit”