A busy day demands a summer re-run.  News is coming soon.  In the meantime, enjoy this post from 2010, unedited.  Yes, I did say this back then without even meaning to predict any particular person.

Stories that stay with us are often built around strong characters.  Consider for a moment any story that you have enjoyed, either in book form or on film or from an exchange among friends – what is it that you remember the most?  Odds are it will be the Harry Potter or Gatsby or someone’s strange uncle as much as the meanderings of the plot itself.  They are the star of the show, the person we either relate to or want to be like or at least would like to know.  Set them up, and the situation of the plot often moves forward through the force of their will.

Less obvious is fact that this also guides the non-fiction world.  Entertainers carefully craft their public persona, as do politicians and even nooze commentators.  Understanding how to do this can make a blog much more compelling. 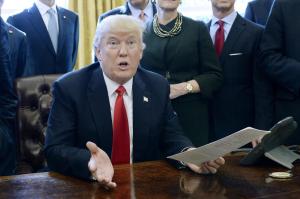 Trump preparing a memo to Congress. That’s about it.

What makes a good character?  The easiest way out is to be exactly what people expect.  Certain genres require a well-defined kind of character to make the connection, even if that character is not all that real.  Detective stories are my favorite example of this because the lead has to be a tough, streetwise man (almost always a man) of action.  A writer can play off of this a bit as “The Rockford Files” did by giving the lead a big heart and a sense of justice, but they’re still largely trapped by convention in some forms of story.

Characters have to have depth, usually a past that bubbles up to the surface in strange ways as the plot advances.  A desire to know the mystery behind the star can make him or her compelling enough to move even a fairly weak plot along nicely.  They also have to at least appear to real people with genuine emotions motivations.

There is a lot more to crafting a good character in fiction, particularly if you take the “method acting” approach of getting inside their heads.  A lot of that is pure improv and can be left up to your imagination.  But these same skills are used by nearly everyone on teevee to make themselves appear to be someone that people like – or at least love to hate. 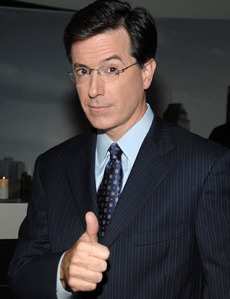 The best example I can find of character development in supposed real life is Stephen Colbert.  His character on “The Colbert Report” is actually a parody of personality driven “news” commentary, but like so many things in the infortainment world his character is more real than reality.  From all accounts he’s actually a decent guy, but he’s opted to play a very arrogant kind of clown for his show.  What makes him compelling?  In his character’s case, excessive confidence that goes over the top makes him interesting, especially as an obvious parody.

Rockstars all have their own persona which I’ve gone into many times.  Like detective stories, the  believable and accessible options open to them are pretty thin, which is unfortunate.  I just want to see one of them smile broadly some day.

The process of crafting a persona has not been lost on many bloggers, either, but as amateur writers and micro-celebrities (thanks, Justin!) many do it badly.  The most commonly cribbed style is something of a Drudge clone, the newsman with a hard-boiled past that isn’t all that different from the detective hero stereotype. I believe that this has been easily adopted because it seems like a quick way to develop a rapport with readers, but it’s still very thin and ultimately not very compelling.  If nothing else, it begs a lot of questions about the writer’s past and street cred that have to eventually be answered if it’s going to be maintained. 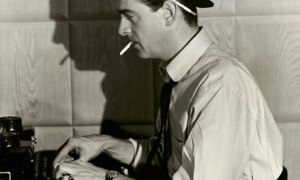 What is a good persona for a blogger to have?  Generally, it depends on what you write.  The best persona is generally your own true self.  Rather than put on an act of some kind, the best blogs generally are very open and heartfelt.  That doesn’t mean that the writers don’t pay any attention to how their character is perceived.  While I won’t claim to be a good example of persona development, I do find that talking about my own strange past and easily admitting when I’ve been wrong have helped people to get to know me, as a person, despite the impersonal nature of what I write about.

Almost all writing, fact or fiction, requires a strong character if people are going to continue to relate to it over a long period of time.  Understanding this and paying attention to it does not mean you have to be false – in fact, characters are most compelling when they are true or at least very well-rounded.  The more you can get to know your own character the more your readers will want to get to know it, too.