Many people, especially Republicans, wonder about the need for health insurance in the first place. Wouldn’t it just make sense to pay as you go, whipping out the credit card for routine doctor visits?

This sounds ridiculous when considering serious illnesses, but it may make sense in any system for small things. When a sty in my eye became infected I realized I had the perfect opportunity to test out “the system,” to the extent there is one, to see how pay-as-you-go might work.

The short version: I got sick and don’t have insurance. We all have our adventures.

Just about the worst picture of me ever. Usually it’s my living conditions that are described as “sty”.

First, we have the condition. My right eye is puffy and inflamed from what I knew all along was an infected eyelid, a sty turned into a habitat for bacteria. I have had this several times, and it’s know to be something which can come back. Usually, it goes away on its own after a few days.

This happened once when I was in Germany. I remember having to have a consultation with an Apotheker (pharmacist) and he wrote the prescription right there. The only difficult part of the whole process was understanding medical terms auf Deutsch. It cost me twenty-something Euros and probably twenty minutes before I was merrily on my way.

Let’s consider that the baseline for how a system might perform.

I did consult a pharmacist this time for the stuff, and the answer is that I needed a doctor to prescribe something. I chose for my doctor the Minute Clinic located in a Target store largely because it seemed to me that this was exactly the kind of thing which they would be set up to handle in the first place.

The wait was about two hours. Granted, this is the day after Labor Day so it’s hardly surprising. But it was long enough that if I wanted to get myself repaired whilst loading up on household supplies and whatever else Target stores have to offer it was a bit long.

The doctor was apologetic, saying this was unusual. I accepted that. She took my vitals and told me my blood pressure was on the high side of normal, 134/94. That is useful information since I’ve never had that before. So it was worth the $89, discreetly billed.

Target has an in-store pharmacy, so it was simple enough to get the ointment prescribed. Or so I thought.

The lines at the pharmacy were reasonable but the process was complex. I asked how much it would be out-of-pocket, and after a few clicks I had my answer: $252.00. Wow! Didn’t they know my blood pressure was already a bit high? I was then asked if I was paying this myself, and I said “Yes!” as proudly as anyone without insurance ever will. The immediate problem went unsaid beyond that. A few more clicks on the keyboard and I was sent to someone else for consultation.

At that window a short conversation began. Would I be comfortable with a similar generic ointment? Of course! We can apply come coupons to cut the price down, click-click-click. OK, we have that in stock, just wait a bit. So off I was, uncomfortably waiting in and around the feminine hygiene products trying to not look creepy. 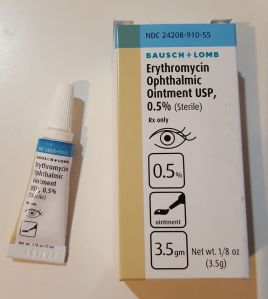 The stuff. Was it really worth all the trouble? (yes)

After a few minutes I was told it was ready. I still had no idea what it would cost, so I was expecting the worst. “It’s five forty, will that be cash or charge?” How much? I was still getting used to the $252.00 bill. Double that? No way!

Then, it appeared on the screen. $5.40. I had to blink my good eye a few times until the panic subsided. Oh. I think I can swing that.

What would this have cost overall if I had insurance? Did I just tap into the pool reserved for indigent people who frankly deserve it more than me? I have no idea. There’s no indication on the bill or the prescription as to what it really “cost.”

A short drive home and some goop around my eye and I am all set. Back to being as healthy as … well, I’m never really sure how healthy I am.

Was this a good experience? It wasn’t bad, but I liked how it was handled in Germany a lot better. There, it was cheaper and more free of hassle. In the end I don’t feel like I really learned what I hoped to about pay-as-you-go because it is unlikely that $5.40 covered anything.

Should this be a part of any system we develop in the future? The short answer is that we have a lot of work to do on our “system” no matter how you look at it and which model you favor.  Pay-as-you-go should be an option for small things like this, perhaps as part of a Health Savings Account (HSA).  But there still has to be a better way overall.