Labor Day is brought to you by those who brought you the weekend – Organized Labor.

When I worked in Germany for a short time in the 1990s, labor relations often came up. Some of my colleagues were envious of the US system while most hated it. All of them, however, had a term for what they understood our core principle to be – “Hire and Fire”. The idea of an “at will” employee with no job security in law and no loyalty by tradition was alien to Germans.

Compared to the nations in the developed world which we compete with, our position is unusual. It’s a bias at the foundation of our system – a natural outcome of the demand for a flexible workforce. This is also likely to change as more and more skill is needed to do the jobs of tomorrow. 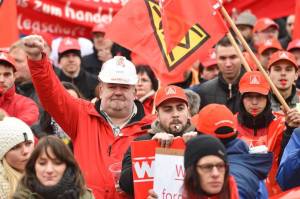 For many reasons, unions seem somehow old-fashioned in the US today. Participation is about 1/3 what it was at its peak sixty years ago. Stranger yet, when people talk about bringing back the 1950s, usually in coded language, union membership is rarely part of the shtick. There was a time when the entire industrialized world was more or less on the same path.

It once seemed natural to us that workers would organize. But my German friends were right – there is a difference at the core.

American industry has always favored flexibility in the workforce over anything else. If times are good you hire more people, when times are bad you fire them. It seems very stark to hear a foreigner describe it in these terms, but no one ever said the German language was subtle. American jobs are made as simple as possible and the workers are just one more gear in the big machine – changed out as necessary.

German industry, like most of the industrial world, has always heavily favored the development of skill instead. Skilled workers are more expensive, so this system demands high productivity. It also demands loyalty and stability. A worker with skills can pick up and find another job, so you better make them happy enough to stay.

Thus one small bias at the core of industrial philosophy changes absolutely everything.

Once you have a bias towards skills, some amazing thing start to happen. For one thing, it becomes natural for workers to organize. It’s not only about good pay and the benefits which make employees happy, either. The development of skills and the process of training in new employees or developing broader skills in general often falls to the union.

Skilled workers are always quick to organize. The first known industrial action was taken by skilled masons tired of the crappy conditions and pay imposed by Pharaoh Ramses III in 1150 BC. It’s also no mystery that the Freemasons were the first to organize in the modern era for the same reason.

Workers organize when they can – because they can. High skills invariably means unions.

Coming back to the US today, we have the strong anti-union position held not just by US companies, but also by many politicians and workers themselves. The 2014 rejection of the United Autoworkers at a VW plant in Chattanooga, TN was only the most bizarre instance of this. Despite Volkswagen’s best efforts to organize a “works council” around the union, the arrangement they had come to rely on, the good folks of Tennessee had a fit over the idea. Didn’t VW come to the volunteer state because it is non-union, er, “right to work”?

The short answer, if you’re a company looking for skilled labor, is no.

There is little doubt that US companies like the flexibility of our system. But the need to define jobs as simply as possible and keep out unions that stick their noses in the business puts this smack up against the need for a highly skilled workforce required more and more in the new economy. But it doesn’t have to.

We can, and almost certainly should, define a new relationship between workers and management in this new economy. It probably won’t be defined first by law but by the workers themselves in the next few years as the shortage of skilled workers starts to bite. The definition of “flexible” will start to include time to raise a family. Unions will probably trade higher wages for security, probably in the form of a union contract that can move workers between different company and still give them good supplemental pay inbetween gigs.

How exactly will this work? It’s not clear. What we can say is that it will be much more organized than it is today. Workers will be more skilled and more in demand. That means more unionized – it always has and it always will.

3 thoughts on “Unions are Our Future”