Home » People & Culture » A Celebration in the Family

Of all the holidays, Cinco de Mayo is one of the strangest. As a holiday for people of Mexican ancestry, it is hardly even known in its home nation. It is a commemoration of a battle which ended an occupation absolutely everyone would otherwise rather forget. Its celebration is more commercial than cultural, coming off as something like St Patrick’s Day with better weather and better food.

But this is as good of a day as any to study the strange relationship between Mexico and the United States. With all of the twists and turns of a telenovela, this story is also one of an extended family with far too much effort wasted fighting. 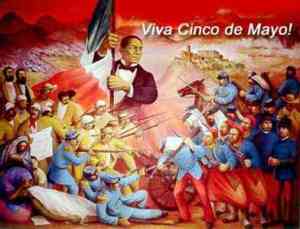 A mural depicting the Battle of Peubla.

Traditionally, in many European nations, the future of children was decided as they were born. As girls were all prepared to become ladies and mothers, boys had their roles assigned based on birth order. The eldest inherited the land, the second become a soldier, and the third became a priest. So it is in our North American family of three brother nations, The United States, Mexico, and Canada.

As a dutiful soldier, Mexico has always been content with hard work. The culture seems to be based on gratitude for life and whatever pleasures it brings as much as anything. Sitting around and whining for fairness and more attention is simply not part of the character of the nation.

On a day like Cinco de Mayo we can see that this is a good way to enjoy life. But it’s a hard way to move ahead and be stronger.

A wise man who came from Mexico once told me that he never saw the Mexican flag in Mexico, but has seen it flown proudly and often here in the United States. People never think of themselves as “Mexican,” apparently, until they are told as much. As a result, Mexico is probably the one nation on this planet that could actually benefit from more nationalism.

Lately, they’ve had reason for it and are responding in kind. The terrible racism delivered by Trump has been met with a new determination to stand up and be a great nation on its own. New trade deals with China and increased relations to the south have put the Mexican economy in good shape. The growth rate of 2.3% is outpacing the US and may be accelerating.

It has a long way to go, with one tenth the GDP and one third the population of the US. But this is only comparing Mexico to the US, a game that never suits anyone. What matters is that as the 11th largest economy in the world Mexico has something to grow on as it moves away from the family that is rejecting it.

What does it mean to be Mexican today? More and more, it means a person who is still grateful but now has room for a certain level of well deserved pride. It’s a person who takes care of business and still has time to enjoy life. It still means no whining, but increasingly even more determination.

Indeed, the problem for Mexico has always been that it feels compelled to compare itself to the United States. By doing this less all the time, the comparison has unquestionably flipped. People from the Estados Unidos seem much, much less in far too many ways as Mexico marches forward.

That alone is worth celebrating on Cinco de Mayo or any day, frankly. ¡Salud!

To celebrate this day, I give you the fabulous Tish Hinojosa and the song Banderal del Sol (Flag of the Sun). Imagine standing on the border with two flags flying in the hot breeze – one red, white, and blue and the other red, white, and green. Above them is the flag of our common humanity, the flag of the sun. And through the heat and the tension comes this beautiful voice capturing the moment perfectly.

One thought on “A Celebration in the Family”