This piece from four years ago is a bit dated, but it also is not. We do need to find original sources, and far too many important issues in our world are clouded by the lack of them.

The internet is a wide, rolling river of information. It can be treacherous and dangerous to wade into if you’re not careful. If you’re looking for a cool drink of truth, the muddy brown of this mighty Mississippi of data often has a harsh stench of bias bubbling along with the waves. What can a reader thirsty for knowledge do?

The answer is to seek the source – the cool, clear stream that feeds into the torment at the headwaters. I call it the “Urquelle”, a German word meaning “original source” favored in the mountains and rolling hills that are the source of so many great rivers in Bavaria and Bohemia. This process of seeking out primary sources is valuable not just for writers, for whom primary sources have long been a staple of good, useful prose. As surely as reading is writing, today’s discerning reader should also seek the Urquelle.

Lake Itasca, the source of the Mississippi River. The water is cool and clear.

Many big stories take on a life of their own on the ‘net. The process works through and around the mainstream media where people are paid money for the purpose composing a story into useful information. Sometimes their sources are eyewitnesses or original documents found on the internet. But people often take off from the professionals, adding their own comments before sharing the story on social media. These might feed back to the mainstream eventually.

Information strays away from the truth for many reasons once it leaves the primary source. A professional writer may not have time or space to say everything they need to. People with one perspective may use what they find to push one part of their agenda, even as propaganda. Without the Urquelle it’s hard to tell just what potential problems there are.

To use one example, the situation in Ukraine is an important story that has many people’s attention. But the Urquelle for much of the information is not in English originally and very far away from people in the US. That doesn’t stop people from offering their own comments and perspectives to secondary sources and hear-say despite some obvious difficulties.

The flow of information from Ukraine quickly becomes as rolling and brown as the Dnieper River flowing past Kiev.

The recent protests in Kiev. Note the blue and gold flag of Ukraine alongside the blue with gold stars of Europe.

In order to make sense of one aspect of the story, I went back to the moment when the protests started on 21 November, which was when a treaty with the European Union was rejected. What was in that treaty? I pulled up the original source, the treaty itself and the conferences that shaped it. Those sources served as the Urquelle for one perspective that has to be illuminating, even from very far away. And, more to the point, it is one that has hardly ever been discussed in the mainstream media.

Many big stories like this look very different from the original source. Before anyone jumps to conclusions, it’s best to see if there is an original source that backs up the claims of any given site on the ‘net. That has to start by determining if there are any primary sources in an article. If there aren’t, it’s probably not worth repeating.

Stories like that often make their way back to the mainstream, too, so it’s not just blogs that you have to watch carefully.

Another good example of stories that take on a life of their own are polls, a subset of scholarly work that might have many potential conclusions buried in a mountain of data. Many people like stories based on polls because they have the allure of hard, scientific fact. But the very least you have to expect is a link back to the original report on the data. A statement about how valid it is reported to be is also important, especially when a difference noted is within the margin of error. Without the original source, the validity of a poll cannot be verified and it should never be taken as some fact, despite the allure. 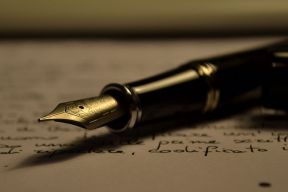 We are all writers, of a sort.

Good writers have long looked for primary sources. But in today’s internet world links are shared by readers on twitter and facebook, and are often further amplified in blogs. If you share a story without the Urquelle, you are contributing to the mud in the great river of information.

What is the Urquelle to a reader, writer, or sharer on social media? It is nothing less than the cool, clear original source of information. It can be a scholarly article, an eyewitness account, or a big long treaty. It may be a mountain of data or a properly formatted chart that includes where it came from.

In any case, the original source should be used whenever possible. Without that Urquelle there is little available for the seekers of truth to navigate on the rolling brown waters of a big story flowing through the ‘net.