It’s been twelve years. On a miserable April night in 2007, Barataria began.

Like everything, it had a humble beginning. And a rather humble middle. I’m not sure how it will end, but it remains primarily whatever I am thinking about at the moment, the place where I unload my brain to get on with things that actually pay me a living.

Somewhere along the way, it started to feel like I had something. Since you’re reading this far, I hope that means that you agree. So please allow me a somewhat drifting and personal reflection on this anniversary. 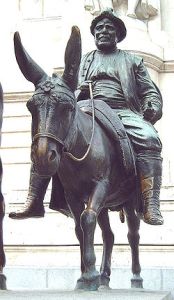 Statue of Sancho Panza in Madrid

A reasonable summary of Barataria was made on its anniversary nine years ago. This blog is about connections, first and foremost, and how they apply to the world as we know it. This has been my job as a writer through all these years as I connected people with ideas and information and companies with products to sell.

We all do start from humble beginnings.

What I have discovered along the way is that disconnection is a term which defines far too much of our world. As we have become more inter-connected across the planet, the volume has gone up dramatically. Too much information is roughly the same as none fi no one can hear it – or if no one wants to.

The secret to building connections in this bizzy and noisy world appears to be a process of being strategic and careful. It is vital to know yourself before you ask the world who you are, given that a connected world is if anything more indifferent. It’s important to note that the world is not actually hostile, but many would prefer if it was as the opposite of love is not hate, but indifference.

The development of a concept of People’s Economics has defined the last four years of Barataria. There are some basic assumptions, but they all revolve around a world which is advancing rapidly through technology exchange and development, whilst sharing that technology more and more across lines which confound the nation-state.

Our brain remembers by making new connections, so the concept is central to our entire thought process.

The basic premise is that economics is traditionally a system designed for the purpose of managing scarce resources or products. Given that the poverty and poor distribution systems which defined the world a few generations ago have been solved, our definition of what is “scarce” is not what it once was. Modern capital markets have made capital available to nearly anyone with a good idea and a solid team. Vast pools of labor can be assembled all over the world to accomplish many things, but machines have largely replaced the need for manual labor and are often much more efficient.

What is scarce in these times? What does our system of choice need to manage effectively? The most important thing in short supply is often skill, which only makes sense given that techne is Greek for skill A world driven by technology is, at the human level, a world driven by what the human mind can imagine, yes, but more importantly what skills can render in practice.

While it is entirely possible for many skills to be developed by AI and robots, people are the core of the economy – their skills, their ambition, their passions, and their fulfillment. The new world of global markets which is replacing industrial nationalism has to be defined in these terms.

Equity at its best is partnership.

And so twelve years of connections have come down to a series of prescriptions about how people connect and take control of whatever economy is developing around us. People are, no matter what, the reason, the engine, and the consumer of whatever we might call an “economic system.” The various -isms defined generations ago are largely irrelevant outside of what they teach us. Like any technology, what matters most today is not replicating ancient ideas but applying them in new and relevant ways.

And so that is where we are after a twelve year journey. The connections of the world, as we know them, far too often make life harder for people. But the center of our world is, and must be acknowledged to be, people. That is what Barataria is about.

4 thoughts on “Twelve Years On”