Things rarely go as planned.  I was hoping to move from my analysis explaining the current Depression (or potential Depression) into some solutions.  Along the way, I realized that most of my solutions were rather vague, which is to say a lot like FDR’s plan.  Since I don’t expect anyone to believe I have anything in common with FDR (other than being a terrier owner), it seemed like time to punt.  Beyond that, it became very clear to me that people do not understand why a heavy reliance on finance is such a bad thing.  So here we go.

I’d like to start with the following graph, which is at the heart of my argument.  It shows the share of Gross Domestic Product (GDP) taken up by just three sectors that have changed significantly over the last 60 years – Manufacturing, Services, and the catch-all Finance, Insurance, and Real Estate (FIRE). 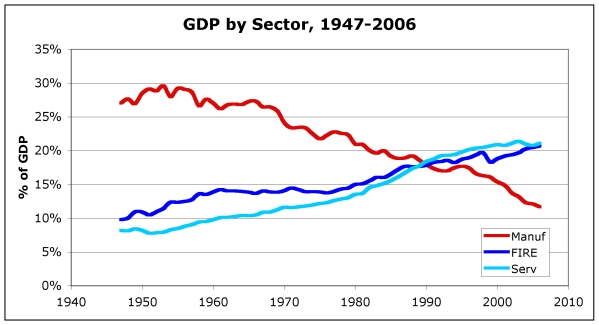 Note that during the Glory Daze of Annette Funicello and Beaver Cleaver manufacturing was a much larger percentage of our economy.  Around 1968 or so it starts to turn downward, and is now less than half the share it once held.  FIRE and services both climbed to fill the difference.

The next graph is harder to explain.  It shows the net income disparity by looking at the definition of “Middle  Class” that is most commonly used – the middle 60%, or where you cut off the income limits to leave off the top 20% and the bottom 20%.  The ratio between them shows how the two ends of the Middle Class are doing. 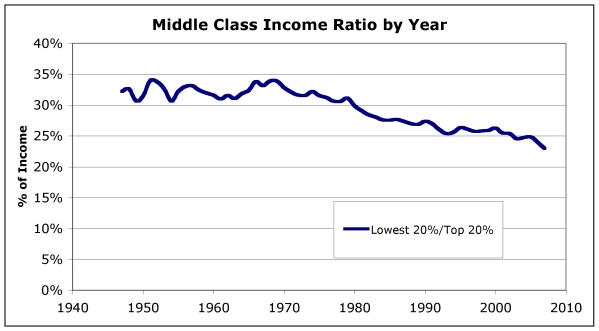 Note that about the same time Manufacturing started to slip as a share of our economy, the upper end of the Middle Class went from about three times the lower end’s income to more than four times as much.

These are closely related because the three sectors I am highlighting – again, the only ones that significantly changed as a share of GDP in this period – have very different employment profiles.  FIRE typically creates a small number of high paying jobs, while Services have a large number of lower paying jobs.  Manufacturing jobs were, at least before 1968, the backbone of lower-middle class America, providing a relatively large number of high skill, high wage jobs.

The relationship between these sectors is at the heart of why income disparity is growing in the USofA and why our economic security is being threatened.  How does this happen?

The high overhead cost per employee and the relatively high value of the dollar are the reasons why.  The dollar is strong for many reasons, including international agreements and our incredible economic power.  Foreign traders look to the USofA as a safe place to invest, and when we also became a place to make a lot of money the dollar only became stronger.  Our financial excesses are directly related to the sickening plunge that occurs at the end of both curves, bringing us to today.

In short, the great American Empire is the single biggest threat to America, or at least the nation we like to mythologize.

I realize that some people believe we can make an entire economy out of little more than intellectual property and finance.  They often see factories as dirty and outdated.  My message is not likely to be popular, at least among people at the upper end of that middle-class ratio I described.  My response to them is simple:

If you haven’t figured out that what we’ve been doing isn’t sustainable, please fasten your seatbelts.  Thank you.

12 thoughts on “Build a Better Tomorrow”